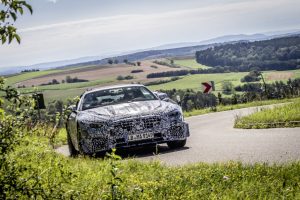 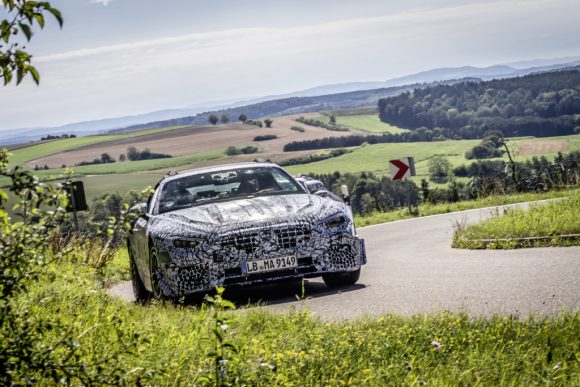 Travellers are quickly making plans to return to the UK from the Czech Republic, Jamaica and Switzerland before new quarantine measures are imposed.

Transport Secretary Grant Shapps announced yesterday that those arriving in England from those countries after 4am tomorrow will need to self-isolate for 14 days.

The Department for Transport (DfT) said equivalent measures are being put in place in Scotland, Wales and Northern Ireland. 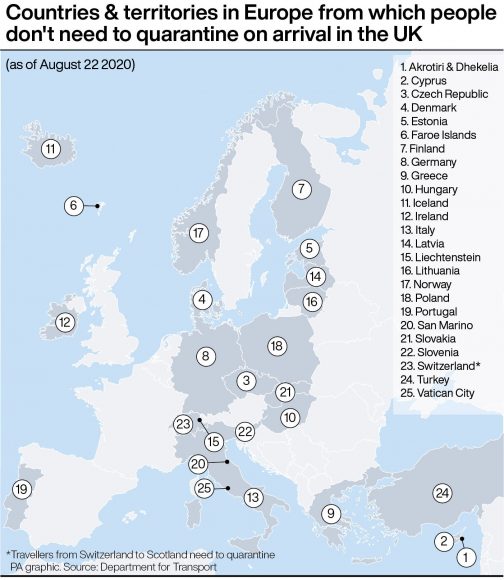 Countries & territories in Europe from which people don’t need to quarantine on arrival in the UK. See story HEALTH Coronavirus Infographic PA Graphics. An editable version of this graphic is available if required. Please contact [email protected]

Delivery companies will team up with the government to help map England’s pothole hotspots, the Transport Secretary has said.

The Department for Transport will work with Gaist, a road data and mapping company, businesses such as Deliveroo, Uber, Tesco and Ocado, alongside local highway authorities to identify where there is the greatest need to fix roads.

Grant Shapps said the programme, which forms part of the government’s £2.5bn pledge to fund pothole repairs across England, would help make roads ‘safer for everyone’.

Coffee and sandwich chain Pret a Manger has axed 2,800 roles from its shops after completing a restructuring of its UK business.

The cuts come after the high street chain said last month that it was planning a shake-up which would result in the closure of 30 sites.

Pret said that although there have been ‘clear signs of recovery’ in footfall since the lockdown was eased, trade across its shops is still around 60 per cent down year-on-year.

Mercedes has given an initial look at its next-generation SL. The popular roadster, which is set to be fully revealed next year, has been showcased in disguised, pre-production prototype form.

Undertaking dynamic testing close to the firm’s Immendingen technology centre, the camouflage does well to disguise much of the car’s exterior design, but obvious elements such as the long bonnet and wide grille show a close resemblance to the firm’s AMG GT model.

With a reveal in the early stages of 2021 predicted, it’s likely that the new SL will go on sale towards the end of next year.

London markets drifted into the red as traders turned their focus to Federal Reserve boss Jerome Powell as he gave Wall Street a shot in the arm with a soft approach to inflation.

European sentiment remained strained throughout the session after Powell delivered his new approach to monetary policy, saying he will tolerate inflation rising above two per cent for short periods of time.

Flight arrivals down 89 per cent in July

The number of people arriving in the UK by air in July was 89 per cent lower than during the same month last year, new figures show.

Some 1.3m passengers flew into the UK last month compared with 11.1m in July 2019, the Home Office said.

But the figures do indicate a rise in demand for air travel since the start of the coronavirus pandemic. The average number of monthly arrivals by air in April, May and June was below 200,000.

US economy plunged 31.7 per cent in second quarter

The US economy shrank at an alarming annual rate of 31.7 per cent during the April-June quarter as it struggled under the weight of the pandemic.

The Commerce Department downgraded its earlier estimate of the US gross domestic product last quarter, finding the devastation was slightly less than the 32.9 per cent annualised contraction it had estimated at the end of July.

It was the sharpest quarterly drop on record, with the previous worst quarterly fall since record-keeping began in 1947 a 10 per cent annualised loss in 1958.

The Works swings to annual loss after pandemic impact

The Works has swung to an annual loss after being weighed down by impairment charges caused by the pandemic.

But the books and stationary retailer told investors yesterday it has seen initial sales from stores which reopened in June exceed management expectations.

It reported a pre-tax loss of £18m for the year ended April 26, compared with a profit of £2.3m for the previous year. The slump was driven by non-cash impairment charges resulting from Covid-19 of £19.5m, relating to goodwill and downgrades in the value of its stores. 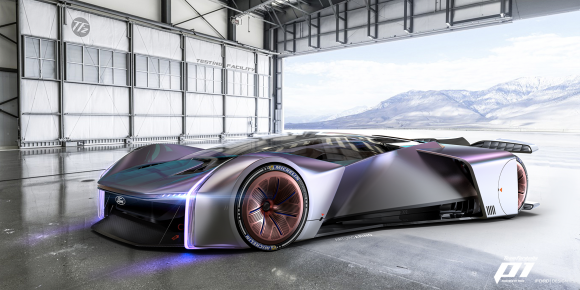 Ford has revealed the ‘ultimate virtual racer’, which was designed in collaboration with gamers around the world.

Gamers voted on the seating position, cockpit style and drivetrain, with Ford’s designers taking these elements and applying them to the finished product.

England and Wales will have heavy showers today although northern England will turn brighter later, forecasts the BBC. Scotland and Northern Ireland will become drier with sunny intervals, but it will feel cooler for most.

Tonight, much of the UK will become drier with a few clear spells developing. However, East Anglia and the southeast will see showery rain lingering. It’ll feel quite chilly in a brisk northerly wind.

Much of the UK will have a brighter day tomorrow with spells of sunshine. However, rain will linger over parts of East Anglia. Isolated showers are possible elsewhere.