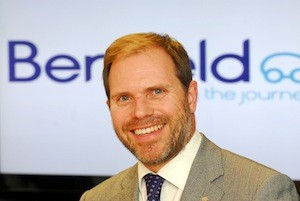 THE latest Top Track 250 list was released in the Sunday Times this weekend with 42 car dealers making the cut.

The league table, compiled by Fast Track, ranks Britain’s private companies with the biggest sales and is published in the national paper each October.

The top-ranking car dealer was Benfield Motor Group, who came an impressive third overall and were the only dealer group to make the top 10. Their latest sales figures, for the year ending December 2013, reached £632.9 million with a profit of £73.6 million.

Ridgeway narrowly missed out on a top 10 spot and ended up 12th on the list. They saw sales of £547 million in the year ending December 2013 and a profit of £11.3 million

Mark Squires, chief executive of Newcastle-based Benfield Group, pictured, told The Journal: ‘We are again delighted to be flying the flag for the North East’s privately-owned businesses in the top 250 league table.

‘It is vital the region’s businesses continue to work together for the good of the region and its economy. It is also particularly pleasing therefore to see several other leading North East businesses prominently placed in this high-profile listing.’