Exclusive: Taxing problem as number plate applications back up

MOTORISTS waiting for a new tax disc after changing their car’s registration plate to a personalised one have been told they should keep their OLD disc on show – even though the registrations won’t match.

Many drivers who have opted for personalised plates are being kept waiting for a new tax disc because of the way in which the DVLA processes applications.

The problem has come about due to the planned closure of local DVLA offices across the UK by the end of 2013.

Notices have been put up in DVLA local offices stating: ‘If you get your registration certificate (V5C) before your tax disc, you can still legally drive your car and display the new registration plates. Your tax disc will arrive shortly afterwards.’ 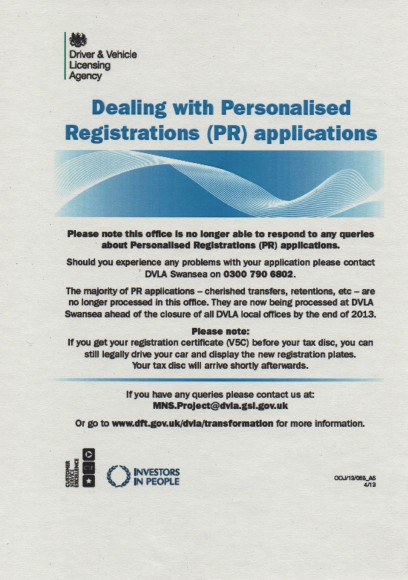 The notice currently being displayed in DVLA local offices

If a car’s number plate does not match the tax disc on display it’s an offence – but the DVLA says that in this instance, motorists will not be breaking the law.

‘We are advising customers who are changing their car’s number plate to a personalised one and have received a new V5C but not their new tax disc to carry on displaying their old tax disc,’ a DVLA spokesperson exclusively told Car Dealer.

‘The two different number plates will match our records and motorists will not be penalised.’

The spokesperson added that all police forces have been notified of the situation. When asked whether motorists could be penalised, the spokesperson replied: ‘That is a matter for the police. We sent out a bulletin informing them – they are aware.’

However, the situation has not pleased a cherished number plate dealer. James Saperia of Simply Registrations told us: ‘It is great that the DVLA is keeping everyone informed of current turnaround times, however we are advising our clients not to fit their new number plates until they are able to display the appropriate tax disc.’

For dealers switching personalised number plates onto new cars, the DVLA suggests car salespeople register cars 14 days before they hand over the car to the customer if possible to get around the problem.

From July, the ‘grace period’ will be extended to 14 days