Grand draw for £31,000 Mercedes-Benz CLA 180 turns into a grand fail at dealership

A prize draw for a Mercedes-Benz CLA 180 at a dealership didn’t quite go to plan – after the drum door was left open, sending tickets spilling on to the ground.

The grand fail happened at Frank Hogan Limerick, with the incident being captured on video, reported CorkBEO.

The competition for the four-door coupe – worth some £31,000 – was held in conjunction with the Limerick County Board of the Gaelic Athletic Association (Limerick GAA) for county team funds.

Hundreds of tickets were sold, and when the big day came for the lucky winner to be selected last Saturday (10th), things started off fine, with entrants being thanked for buying tickets physically or online and wished the best of luck.

But as the drum was turned, tickets started pouring out of the open door – and a voice could be heard exclaiming ‘Jaysus Christ!’ once realisation of the blunder dawned.

The free-flying tickets were then gathered up and the draw was restarted – with the door of the drum firmly shut this time and the car being won by Diarmuid Kiely of Kilmallock.

Limerick GAA originally posted a video on its Facebook page showing the incident, but although it was quickly replaced it wasn’t before someone was able to record it, and it was then shared on Twitter. 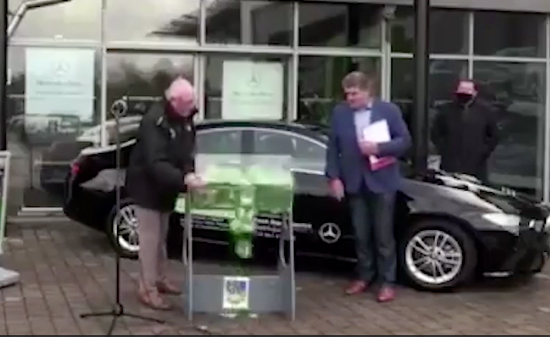 One of the people commenting on it called it ‘the best laugh of 2020’.

Proprietor Frank Hogan congratulated the winner on Facebook, adding: ‘Few hiccups along the way but hey!!’

Main image is for illustrative purposes only