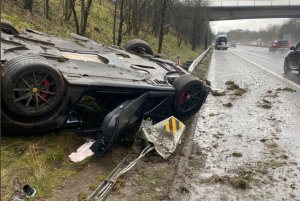 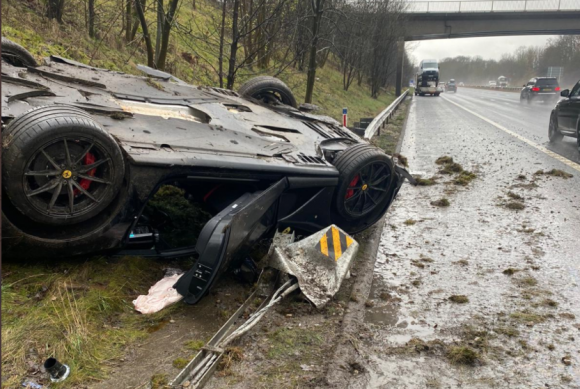 Covid deaths will continue to rise after record death toll

Deaths from coronavirus will continue to rise for some days to come, scientists have warned after the UK recorded its highest daily death toll since the pandemic began.

Officials believe there are signs the various lockdown measures in place around the country are having an effect as the vaccines are rolled out, with infection rates continuing to fall.

Dr Michael Head, senior research fellow in global health at the University of Southampton, warned there could be further ‘record-breaking’ days concerning the number of newly reported deaths. His warning came after the UK recorded a further 1,610 coronavirus deaths yesterday.

Two months of rain in under three days

Parts of the UK could see two months’ worth of average rainfall in just two-and-a-half days as Storm Christoph moves in.

Weather warnings for heavy rain are in force across the country, and the unsettled conditions could also bring significant flooding, high winds and snowfall as the storm engulfs the country.

The Met Office’s most serious weather warning – amber for rain – has been in place across parts of the Midlands and northern England since yesterday morning, while a less serious yellow warning is in place across the rest of England, parts of Scotland and Northern Ireland.

Johnson hails the inauguration of Biden as US president

Boris Johnson has said he looks forward to working closely with Joe Biden as America’s president-elect prepares to take office.

Biden will be sworn in as the 46th president of the United States today at 5pm GMT amid unprecedented security after Donald Trump’s supporters stormed the Capitol earlier this month.

In a statement ahead of his inauguration, Johnson declared his intention to work ‘hand in hand’ with the new incumbent of the White House on promoting their shared goals.

MPs ask HMRC to explain why some taxpayers got no support

The government’s out-of-date systems have allowed people to fall through the cracks for Covid support and made it harder to assess levels of fraud, a group of MPs have found.

Meg Hillier, who chairs the Public Accounts Committee (PAC), said that many workers had been left behind by government schemes because HMRC has old tax systems.

‘As public spending balloons to unprecedented levels in response to the pandemic, out-of-date tax systems are one of the barriers to getting help to a significant number of struggling taxpayers who should be entitled to support,’ she said.

US casino giant MGM Resorts has walked away from an £8bn takeover of Ladbrokes owner Entain after its approach was rejected.

Shares in the FTSE 100 gambling firm – formerly called GVC – plunged as much as 20 per cent yesterday after MGM ditched its plans.

Las Vegas-based MGM said it would not increase its approach or make a firm offer for Entain ‘after careful consideration and having reflected on the limited recent engagement between the respective companies regarding MGM’s rejected all stock proposal’.

Entain weighed on the FTSE 100 as the index struggled to make headway and was down by the time markets closed yesterday.

The gambling company dropped nearly 12 per cent and was the biggest faller on London’s top index, ensuring that the FTSE 100 did not manage to struggle into the green.

Arcadia administrators are set to permanently shut another 31 of the fashion group’s stores by the end of January, with the loss of 714 more jobs.

Sir Philip Green’s Arcadia retail empire collapsed into administration at the start of December after it became the latest company hammered by the coronavirus pandemic.

It is understood that the latest set of cuts, first reported by The Times, will result in the closure of all 21 of the group’s Outfit stores.

HSBC to close 82 branches across the UK

HSBC will close 82 branches across the country, the company has announced.

Sites will start shutting their doors permanently from April 23, starting with Edinburgh’s Princes Street branch, with approximately three closing each week until the end of September.

HSBC said the Covid-19 pandemic has seen a greater shift to online banking although insisted the closures were not entirely related to the lockdowns and restrictions introduced.

Pub giant JD Wetherspoon has said that it expects its pubs to remain shut until at least the end of March as it plans to issue new stocks to secure a £92m cash boost.

The company said it has made ‘zero’ sales in 2021 so far as all of its 872 pubs have remained shut in the face of coronavirus restrictions.

It added that more than 99 per cent of its 37,674 current employees are furloughed as a result. 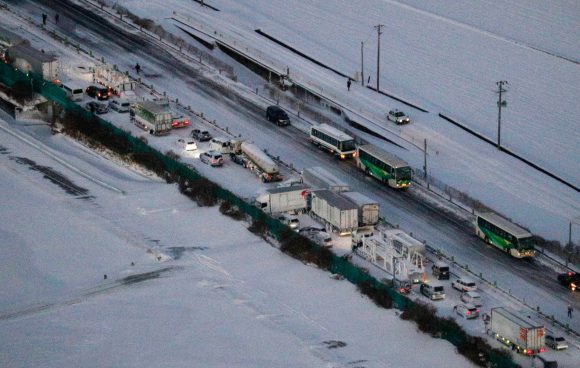 One person was killed and at least 17 injured in a massive crash of at least 134 vehicles in blizzard conditions in Japan.

About 200 people were stranded in the crash, which forced the closure of the Tohoku Expressway in Miyagi prefecture, the Fire and Disaster Management Agency said.

Stormy weather sweeping across the UK has been blamed for a crash that left a £250,000 Ferrari 812 Superfast supercar overturned on a motorway in West Yorkshire.

Highways England tweeted a picture (used as our main image) of the overturned supercar, which looks to have crashed through a protective barrier in wet conditions, accompanied with the caption ‘Storm Christoph 1 – Ferrari 0’.

The BBC says much of the UK will see persistent rain, particularly widespread and heavy in western areas, turning to sleet and snow in Scotland. Northern Ireland will be drier with rain confined to the east coast.

Widespread rain will continue this evening. Southern areas will see rain clearing during the early hours, leaving scattered showers. Rain, sleet and snow will persist in Scotland into tomorrow.

Tomorrow will see further rain, sleet and snow in Scotland, albeit easing throughout the day. Elsewhere will be mostly drier and brighter, with a few scattered showers across the country.