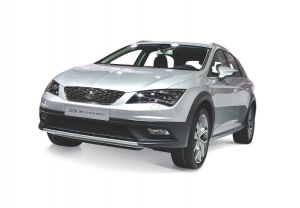 WITH off-roaders creeping into every corner of the market Seat has introduced its first 4×4 model in the Leon X-Perience.

This off-road estate follows in the tyre tracks of the VW Golf Attrack, adding four-wheel drive and a boost in ride height over the standard Leon.

The X-Perience is not the only off-roader on Seat’s radar, however. Seat UK director Neil Williamson told us: ‘In 2016 we’ll have an SUV of Qashqai size – our first time in that market. Just that one car alone gives us access to 15 per cent more of the market. Who knows what might come beyond that?’

A new Ibiza is also in the pipeline, although no details have been released.

And Williamson revealed that not long after the Ibiza facelift a brand-new car will arrive.

He said: ‘What I’ve seen of that car’s early design work we are being quite adventurous. It’s really quite impressive.’

One model that is soon to be killed off without a replacement, though, is the Altea people carrier. ‘It’s probably got another year or so in it. Then it will be phased out as X-Perience takes over. Then we go into SUV.’

The company is also updating its showrooms for the first time in 14 years. Williamson said: ‘Some of our sites look a little bit old-fashioned. Neat and tidy, but old-fashioned. So we’ve got a look and feel which is like our motorshow – very white and red. Dealers are obviously nervous about the cost but we’ll pay for signage and half the interior work.

MORE: New Fabia aims to appeal across the generations