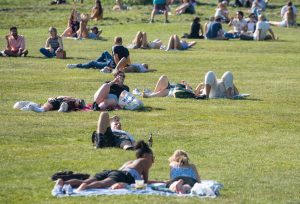 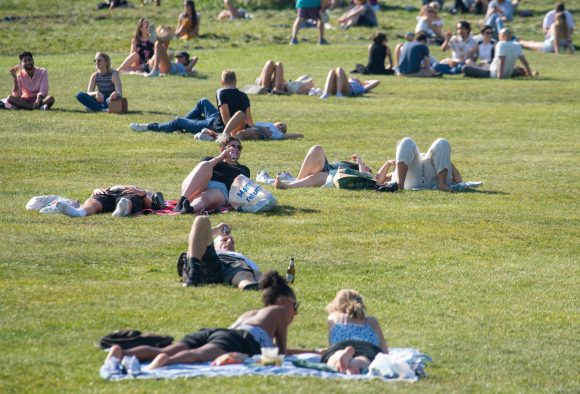 The coronavirus ‘rule of six’ came into force in England today meaning any social gatherings of more than six people will break the law.

People face fines of up to £3,200 if they do not abide by the new measure, which applies to both indoor and outdoor settings and follows a rapid increase in the number of daily positive cases.

More than 3,000 Covid-19 cases were recorded in the UK for the third day in a row on Sunday – the first time since May that cases were above 3,000 on three consecutive days. 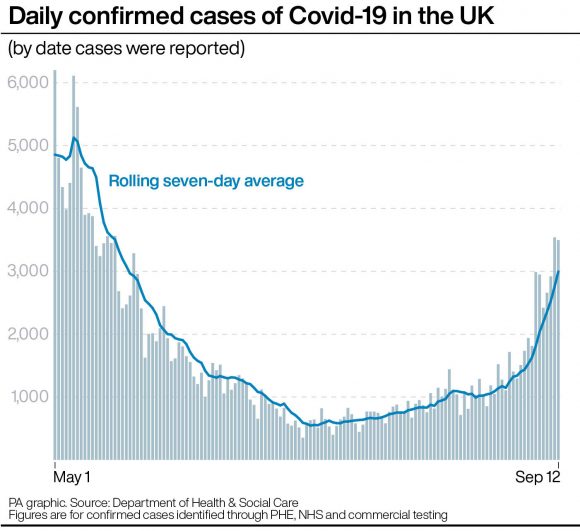 Daily confirmed cases of Covid-19 in the UK

The Bank of England is expected to leave interest rates on hold at the historic low of 0.1 per cent on Thursday as the economy accelerates out of the record recession caused by the Covid-19 lockdown.

But the latest decision by the Bank’s Monetary Policy Committee (MPC) comes as worries mount over mass unemployment and long-term economic scarring from the pandemic once government support schemes end.

The UK is expected to rebound sharply in the third quarter after the eye-watering 20.4 per cent contraction seen between April and June.

Uber’s appeal against Transport for London’s (TfL) refusal to renew its operating licence will be heard this week.

A four-day hearing at Westminster Magistrates’ Court begins on Monday.

TfL rejected Uber’s application for a new London licence in November 2019 due to ‘several breaches that placed passengers and their safety at risk’.

TikTok picks Oracle over Microsoft as preferred US buyer

The owner of TikTok has chosen Oracle over Microsoft as its preferred suitor to buy the popular video-sharing app, according to a source familiar with the deal.

Microsoft announced yesterday that its bid to buy TikTok had been rejected, removing a leading prospective buyer for the Chinese-owned app a week before President Donald Trump promises to follow through with a plan to ban it in the US.

Microsoft said in a statement TikTok’s parent company Bytedance ‘let us know today they would not be selling TikTok’s US operations to Microsoft’.

Government to blame for workers’ reluctance over office return

Marketing supremo Sir Martin Sorrell has slammed the government’s campaign to get people back to their offices, saying it has ‘itself to blame’ as workers shun public transport over Covid-19 safety fears.

The founder of marketing outfit S4 Capital and former boss of advertising giant WPP told the PA news agency the government has not done enough to restore confidence that trains and buses are safe to use.

He said there will be no widespread return to city centre offices until the government tackles worries over coronavirus infection on transport.

Taxpayers cough up as companies go to the wall

The amount of money taxpayers have stumped up to cover redundancy payments for staff at failed companies has more than doubled in the first half of 2020.

New data shows that the Insolvency Service has more than £244m to cover redundancy, holiday pay, pay arrears and notice pay for staff at companies that have been forced to close their doors.

The payments, in the first six months of 2020, are more than 120 per cent up on the same period last year, according to government data.

The deadline has passed for the person who bought a winning lottery ticket in South Ayrshire to claim their £57m jackpot.

A single ticket-holder won £57,869,670 from a EuroMillions draw in the March 17 draw. A claim was staked in April for the jackpot, but Camelot has not yet revealed if it has passed the process of validation.

The prize was technically due to expire at 11.59pm on Sunday. If it remains unclaimed, the money will instead be passed on to good causes.

The UK is set to bask in temperatures of more than 30C this week, as summer heat returns.

The mercury will be highest in southern parts of the UK, but most of the country will see a spell of warmer weather over the next few days, the Met Office have said.

Some north-western parts of the UK and north-west Scotland in particular could see some rain early on Monday, but ‘elsewhere it will be generally dry and sunny’, according to forecaster John Griffiths.