Home > News > Used car prices may dip in a couple of months but hang in there, says Cap HPI

Used car prices may dip in a couple of months but hang in there, says Cap HPI

Used car values are going to come under pressure in the short to medium term but things should improve afterwards.

That was the forecast by Cap HPI head of valuations Derren Martin when he appeared on Car Dealer Live this week.

He said higher unemployment and lower consumer confidence would both play their part in the immediate future, reflecting the economic impact of the pandemic, as would the higher volume of used cars coming back from previous years plus extensions that had been made to leasing and Motability cars that would be returning.

People will want to buy a used car, he said, but will they want to pay more or current prices for one?

‘So there could well be a dip that we think may come September, October time. Quarter four can also be the weakest bump of the year for values.’

Looking further ahead, and with hopes of an economic recovery over the next two or three years, unemployment should lower and consumer confidence return. Reduced volumes from this year’s and 2021’s registrations should also help with prices.

‘I think the good news from this is if you’re writing PCP business for three years’ time, we actually predict values to be pretty much where we would have expected them to be, but we do think there will be a dip in the meantime and then they’ll come back.

‘Longer term, we’re hopeful that it will be healthy, but in the short term I think there could be some challenges – quarter four and next year.’ 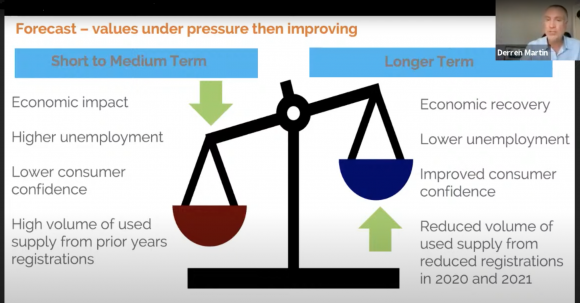 Earlier in the week, Cap HPI revealed that July saw a 0.4 per cent rise in used car prices – the first time there had been an increase for the month in more than a decade – and Batchelor told Martin that one person had remarked to him that it wasn’t a lot, but both he and Martin emphasised that although it may not seem much per car, the astonishing thing was that firstly it had happened during the pandemic, and secondly the previous three Julys had witnessed massive drops.

Also remarkable – and remarked upon – was the 98.3 per cent CAP Clean peak that was achieved mid-June.

Batchelor commented: ‘If you’d said that you can expect a peak like that late March I think most people would have laughed at you.’

Martin agreed, saying: ‘No one expected it all. Anybody who says they were expecting it isn’t really telling the truth.’

Also discussed and explained via the PowerPoint presentation were:

Watch the interview in full by clicking on the main image.