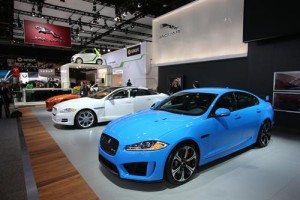 NEXT week, Detroit will open the doors to the North American Auto Show – one of the most popular automotive events on the calendar.

There’s certainly no rest for the wicked! Having welcomed in the New Year just 10 days ago we’re already preparing for the first big show of the year.

On Monday, we will watch as the manufacturers unveil a wave of brand new models to the industry along with a variety of wacky concept cars to keep the press coming back for more.

Detroit is always an exciting event and it’s also one of the oldest motor shows of all time, having hosted an auto show every year for over a century.

It was first founded in 1907, when its focus was strictly regional. But then, in 1987, a visionary group of auto dealers within the Detroit Auto Dealers’ Association asked a bold question: Why not make the event international?

Eventually, that’s exactly what happened. Now, it’s crammed with all the latest gadgets and gizmos, and described as ‘where the global community comes together.’

What’s more, it’s the best opportunity for dealers to see what’s coming up in the next 11 months. Whether it be new stock, the latest technology, or updates from managing directors on the state of the industry, it’s all coming your way.

This year, Kia will unveil its rather extreme looking GT4 Stinger, which has been designed at the company’s American Design Centre in California. This follows Kia’s announcement that a production version of its 2011 GT concept will go into production in two years’ time.

Meanwhile, Infiniti will pull the covers off the Q50 Eau Rouge, which has been designed and built on the same foundations as the standard Q50 model. The all-new Lexus RC F model will also make its world debut.

Car Dealer will be reporting live from Detroit next week, so don’t forget to stay tuned for the latest developments from Motor City.

Similarly, you can follow @CarDealerMag and @CarDealerEd for live Tweets.