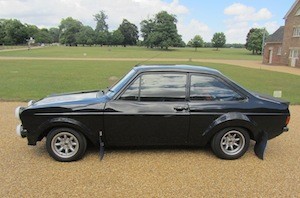 Real Deals: A rally-ready Escort that’s far from being retro

EVERYDAY road cars that are also suitable for a quick blast around the race circuit aren’t commonly found on dealership forecourts, but that doesn’t stop the occasional dealer getting hold of one.

‘It started life as an innocent 1.3-litre Escort before my friend, who I’m selling the car on behalf of, commissioned to have the car completely rebuilt at Mercury Classic Cars in Scotland,’ said Guess, who is based in Bedfordshire.

Since its creation in September 1980, the 33- year-old three-door Escort has had just four owners from new, and since its engine rebuild in 2009 has covered under 500 miles, pretty much making it a brand-new car. It’s the ideal car to show off on the road, to take on track days and to enter for competition.

It’s hard not to mistake this piece of kit for an iconic rally car from the good old days of ’80s motorsport, except this motor has been given a full makeover, inside and out.

‘It’s effectively a brand-new car and it’s attracting a lot of attention,’ said Guess. ‘I’ve listed the Escort on eBay and Piston Heads and so far I’ve had endless emails and inquiries about the car – people think it looks absolutely brilliant.’

As well as a bare metal respray in metallic Ford Puma black, the Escort’s chassis has been rebuilt, while its body shell has been reinforced and sandblasted. In fact, when it comes to mechanical enhancements, this machine has been completely transformed.

Inside, the racing upgrades continue. The Escort comes equipped with FIA-approved competition bucket seats coupled with full harness seatbelts. Drivers will also enjoy its rally suede steering wheel to match its suede ‘dashblack’ carpets, along with its carbon-fibre qualities.

‘He told me that he actually spent more money rebuilding the car than what he’s trying to sell it for, but that’s what he enjoys doing.’

Priced between £20,200 and £22,200, the Escort comes ready and prepared for the road with 12 months MOT and six months road tax as well as a partial service history, which is quite rare for a 33- year-old vehicle.

Guess doesn’t usually deal in this niche area of the market, but because of the amount of interest the little Ford Escort has gained for the company, he says he is certainly keen to dabble more with classic cars in the future.

‘I don’t usually deal in classic cars, especially rebuilds, but I’m definitely considering having more of them on my forecourt,’ said Guess. ‘Depending on how quickly this car sells and based on the interest I’ve received, I’m sure it won’t take long. There’s no doubt I will look into buying and selling more of them.’