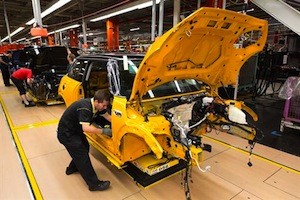 BMW to provide 1,000 new manufacturing contracts in the UK

The majority of the new workers will be based at the group’s Mini plant in Oxford – but people will also be taken on at its pressings plant in Swindon, Wiltshire; engine plant at Hams Hall near Birmingham; and Rolls-Royce plant in Goodwood, West Sussex.

The new jobs are being created as part of a £760m investment programme to support the launch of the new Mini, a new generation of three-cylinder engines and the expansion of Rolls-Royce Motor Cars.

The recruitment is set to take place in two phases between 2014 and 2016, with the initial phase covering 700 of the jobs in the new year and the process for the remaining 300 contracts starting in 2016.

The group’s current investment programme, which runs until 2015, brings the company’s total investment in the UK to around £2bn since 2001. It has seen a new body shop equipped with 1,000 new robots at its Oxford plant, the debut of various new pressings technologies in Swindon while the Hams Hall engine plant is equipped for a new generation of modular three-cylinder engines.