Home > News > Citroen AMI: We take wacky little French car to meet some dealers as 8,000 people register an interest to buy one

Citroen AMI: We take wacky little French car to meet some dealers as 8,000 people register an interest to buy one

Citroen has clocked up 8,000 potential buyers registering an interest in its wacky AMI city car – but it still doesn’t know if it’ll come to the UK.

The French manufacturer has been accepting enquiries from buyers interested in the tiny city car on a special section of its website since the middle of last year.

The firm told Car Dealer that thousands have signed up for more information, but the maker can’t confirm if it will come here and, if it does, how it will be sold.

I spent the week with the tiny city car, for a special video which you can watch above, and to try it out for myself. I even popped along to our local Citroen dealer to see what they had to say about it.

The AMI – pronounced Am-ee, as in French for friend – is a quadricycle with a top speed of 29mph, a range of 49 miles and a charge time of just three hours. It plugs in via a three pin plug. 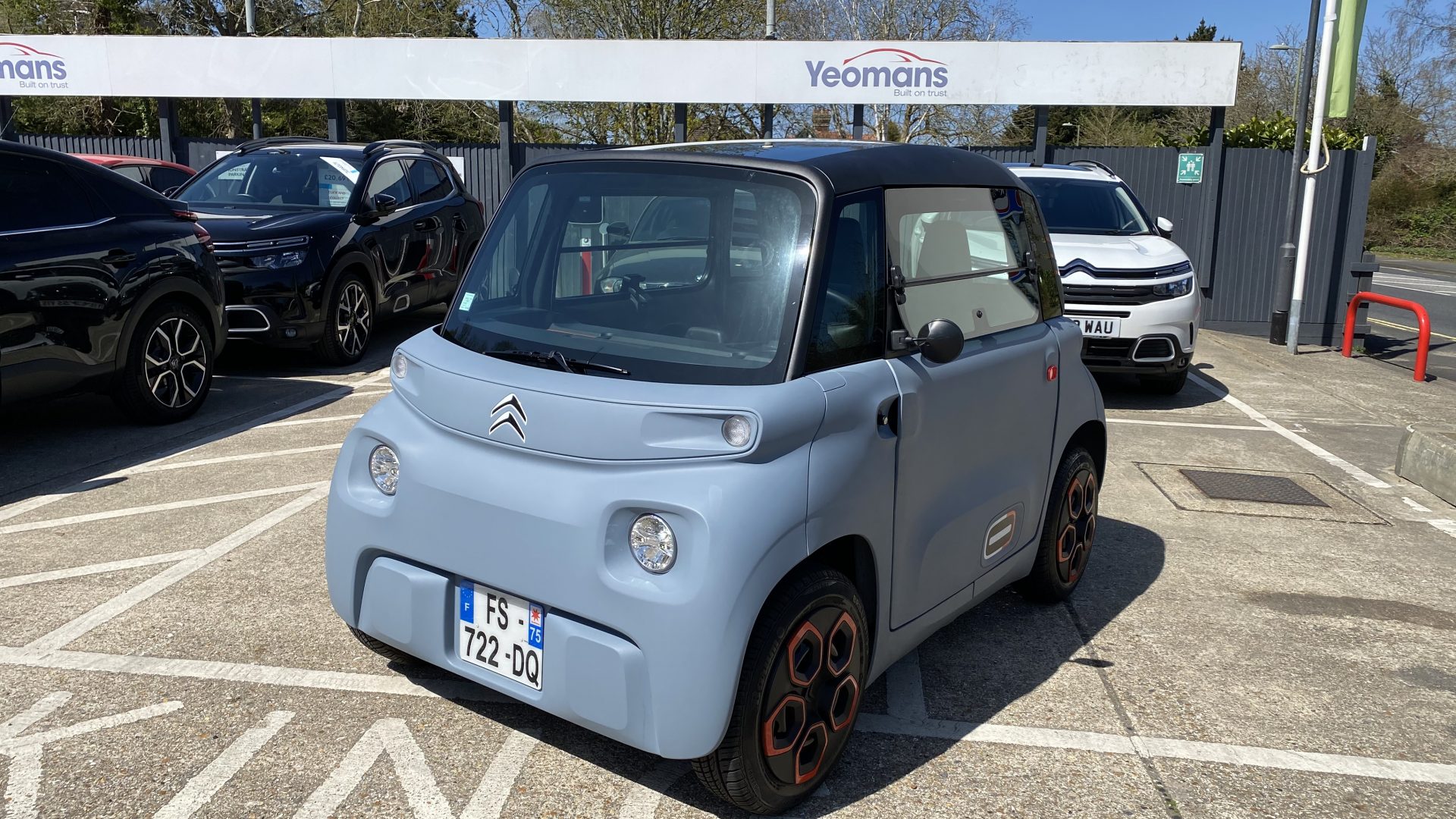 In France buyers can rent, lease or buy an AMI and even 14 year olds can drive it without a licence.

Rental across the Channel costs around £20 a month with a deposit of about £2,500.

Car sharing options are taken care of via an app and are charged at 22p a minute, while to buy, it’s 6000 Euros, or about £5,000, when you take into account the French equivalent of the plug-in car grant.

What that will equate to here is yet to be revealed. What’s more, youngsters hoping to drive it before they get a licence will be disappointed too as, just like the Twizy, they’ll need to pass a full test before they get behind the wheel.

Citroen told Car Dealer there’s likely to be a price increase on the French figures as it’ll have to make some tweaks to it for the UK.

And the firm still doesn’t know if it’ll be sold in Citroen dealers. In France you can buy it in supermarkets and department stores alongside the electrical goods – as well as the brand’s retailers.

What do the dealers think of it?

We took it along to Yeomans in Fareham. Helpfully just 6 miles away from home so no range to worry about.

There we met operations manager Tony Hill who said he loved it.

‘I can see this being very popular with buyers in certain areas – now I’ve seen it in person I totally get it,’ he told Car Dealer.

Salesman David Stimson said he’d already had a few enquiries from customers about the car too. 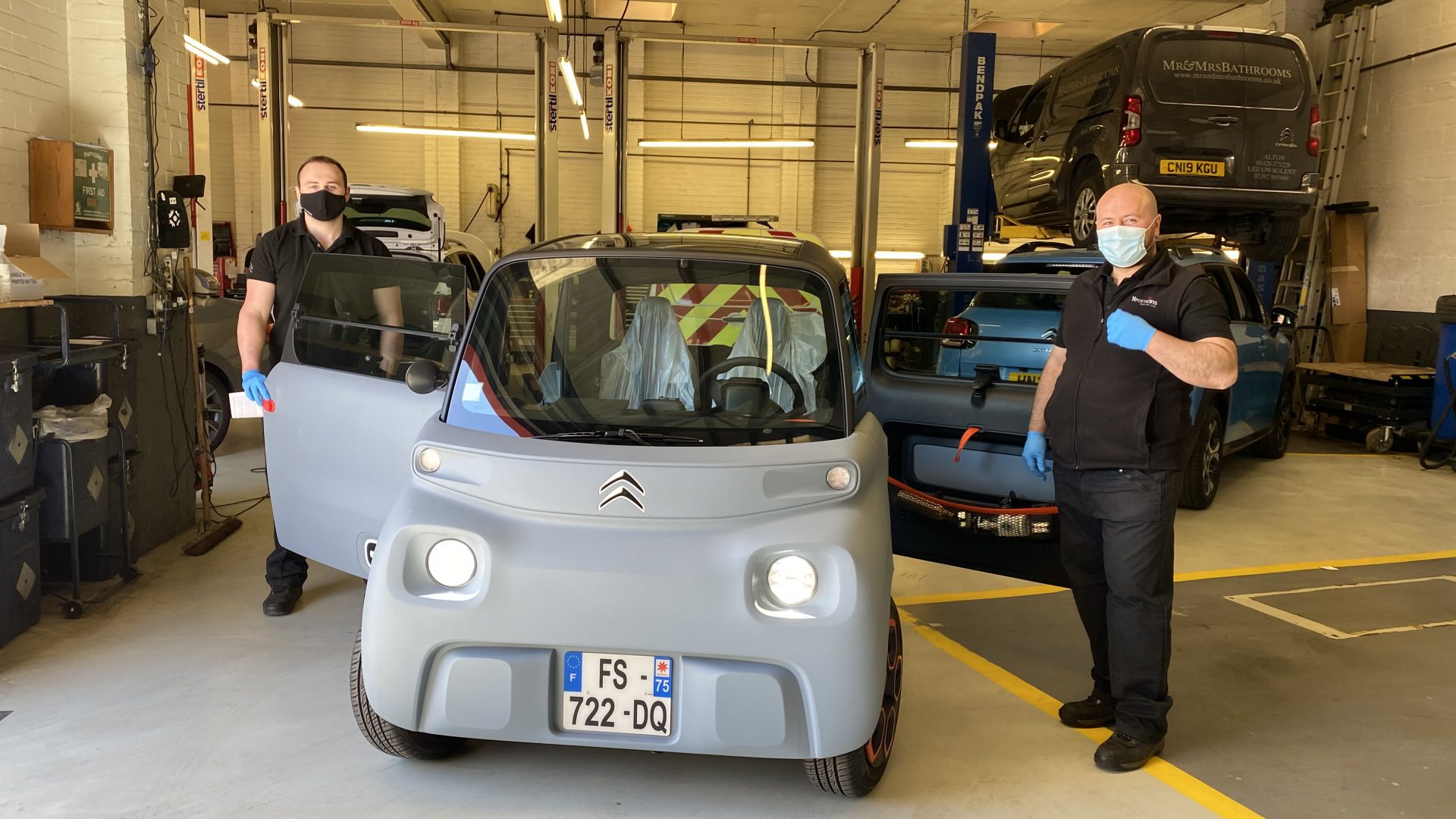 ‘Particularly where we are here, near a big urban area like Portsmouth where the maximum speed limit is 20mph in areas and it’s incredibly congested, something like this would be absolutely fantastic,’ he said.

He added he thinks Citroen should ‘have a go’ at selling it in the UK as the C1 has been popular and ‘there’s a need for small electric cars’.

Well, it’s not exactly swift. It gets up to that 29mph top speed reasonably quickly, but certainly won’t go past it. I tried on many occasions and failed miserably.

The steering is pretty vague and its rattles and shakes over the bumps.

This is simple motoring, though, and isn’t designed to be plush. Think of it as a scooter alternative with a roof and seatbelt and you’re pretty much there.

The controls are simple – think golf cart – you turn it on, press forward or reverse, and then, just, go. 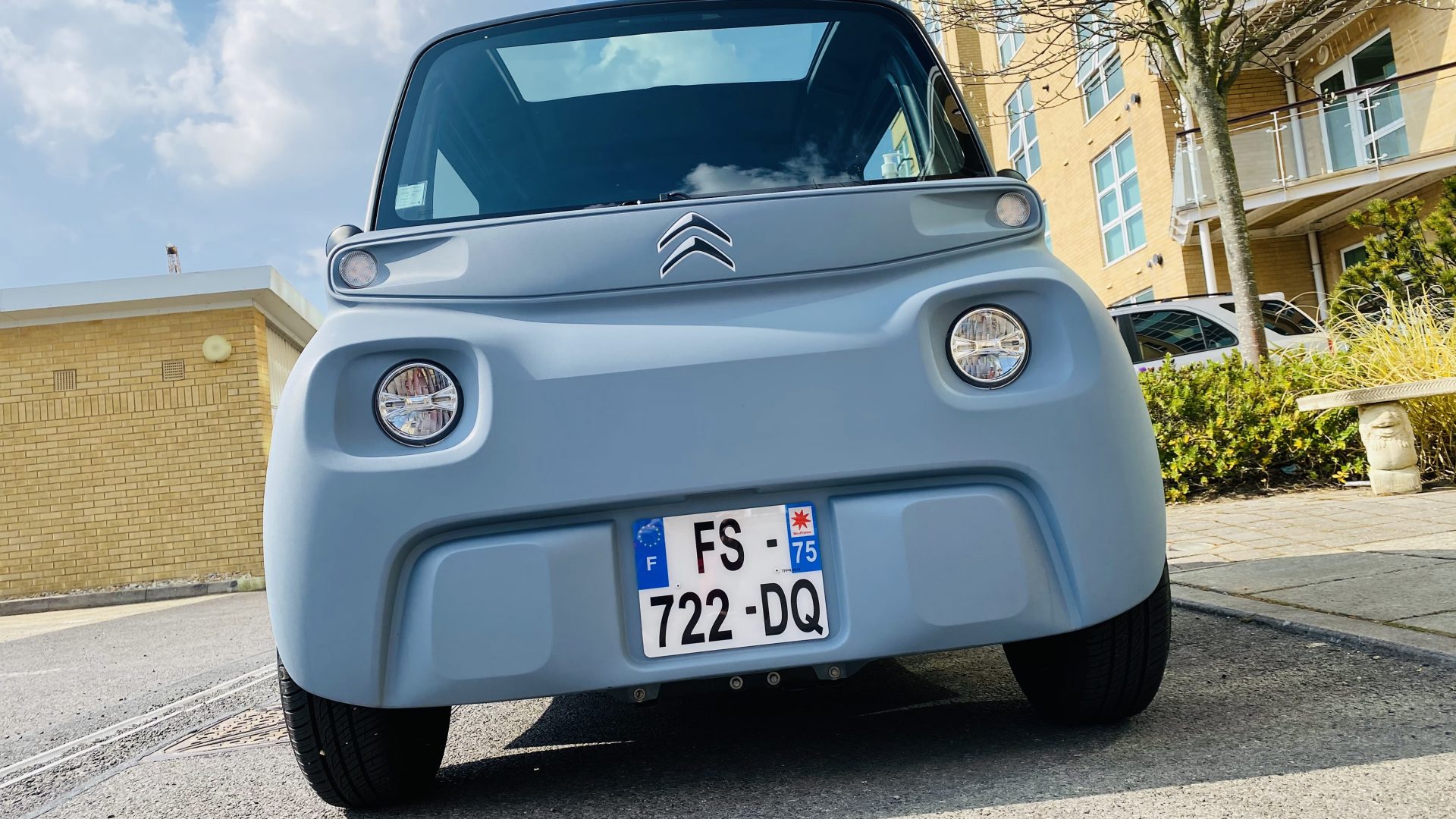 It’s actually really rather good fun to drive, despite the lowly top speed. Around town you can see the old people look on jealousy from the pavement in their open aired buggies as you nip around. I waved back.

Some would say ‘sparse’. It’s got an old school handbrake which seems unusual considering it’s an auto, and the indicators don’t self cancel – like on a motorbike – so it’s easy to forget you’ve left them on.

It’s easier to list the things it has got rather than those it hasn’t. There’s a fan that blows angrily at the windscreen, a hazard warning button for when you’ve run out of charge and that’s about it.

It’s very spacious, though. It might only be 2.4m long but I’m 6ft 4in and when sat in the seat I couldn’t touch the windscreen at full stretch.

The huge goldfish bowl interior is wonderfully light and airy. Perfect for seeing all the strange looks you get as you drive it around town.

The seats are hard plastic with a nod to a seat pad on them, but actually not that uncomfortable. And I like how Fisher Price it all is. It’s all rather chunky, hard wearing and utilitarian.

Well, what’s not to love? French cars have always been wacky and they don’t get any madder than the Citroen AMI.

Yes, it might be completely impractical for anything other than short hops around town, but that’s not the point. This is urban transportation and designed for dropping the little one off at school or popping to the shops.

While it won’t suit everyone, I loved driving it for the week. The reaction it gets from passers-by is one of joy and when I explained the proposed pricing structure they were hooked – in fact I probably could have sold three in the week I had it.

Citroen would be mad not to bring this little electric car to the UK. With a bargain basement pricing structure like France I’m confident it’ll find far more buyers than the Twizy ever did. And from what I learned, Citroen dealers would love to get a lice of the AMI action.