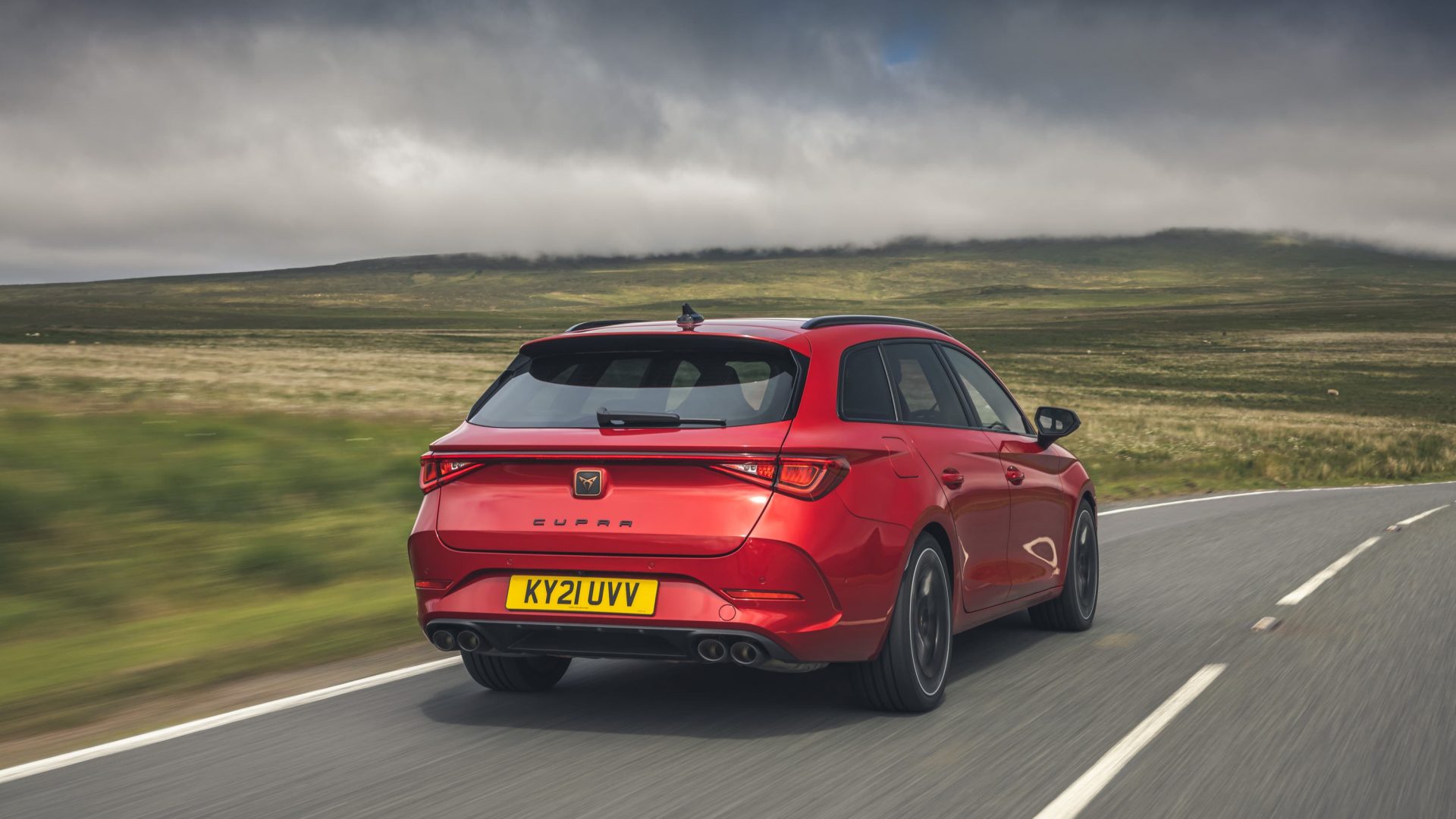 With a big boot and fizzy hot hatch engine, the Cupra Leon Estate makes big promises. Jack Evans finds out if its delivers

Ever since Cupra split from its parent company Seat a few years ago, it’s been working on launching its own cars. We’ve already had the Formentor SUV and soon the Born all-electric hot hatch will come to market.

From time to time, however, Cupra likes to tinker with Seat’s own models. One of which is the Leon Estate which promises to deliver all the spice and drama the Cupra brand is now known for, but in a practical estate car body.

As this is a Cupra model based entirely on a Seat car, the exterior look isn’t as dramatic as on the Formentor. That said, you’ve still got a variety of Cupra’s own touches and – particularly on our estate model – they add up to create a car which does stand out against the regular Leon.

You have, of course, got all manner of mechanical upgrades to ensure that the Leon ties in with Cupra’s performance-oriented take on things.

The Cupra Leon packs a turbocharged 2.0-litre petrol engine with 306bhp and 400Nm of torque. It’s a much-used engine across the wider Volkswagen Group, but you can understand why given its flexibility and – at up to 34.4mpg – its reasonable efficiency.

With power sent to all four wheels via a seven-speed automatic gearbox, the Cupra Leon will crack 0-60mph in just 4.7 seconds before carrying on to a top speed of 155mph.

Buyers can also opt for lower-powered versions of the Cupra Leon with 296bhp, while a plug-in hybrid variant is available too. This most-potent engine can only be specified on the estate, however, rather than the hatch. 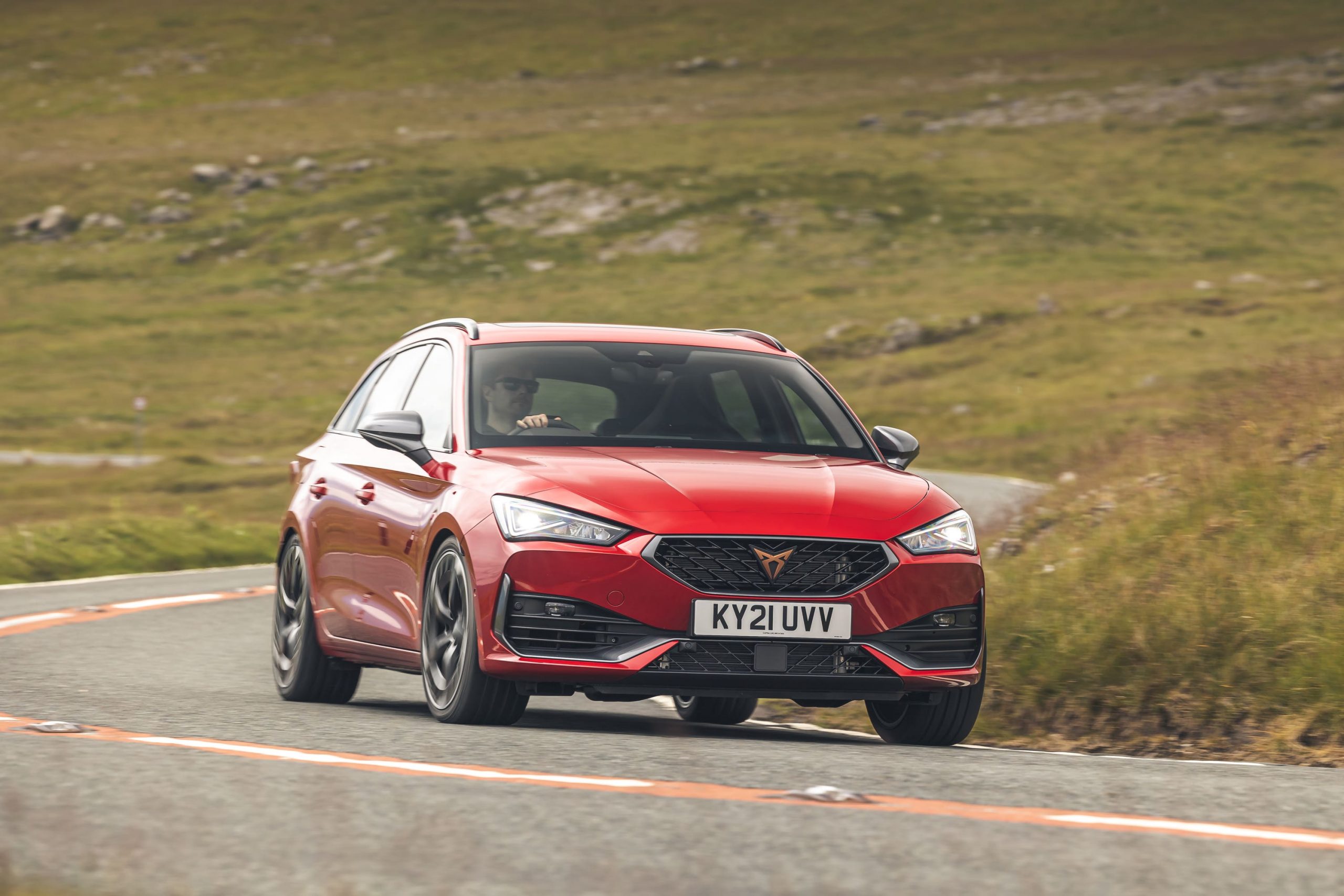 The Cupra Leon feels quick, safe and secure while thanks to optional dynamic chassis control (DCC) it can be made comfortable too.

It’s that final point that is the most important here, as it means you can set the Leon to glide over bumps and imperfections rather than thudding into them when put in its firmest mode. If customers are thinking of going for a Cupra Leon, then we’d suggest they opt for this.

Then there’s the performance on offer, which is more than enough for daily driving.

Because of the all-wheel-drive system you can deploy the car’s power no matter the conditions, ensuring quick and easy progress at all times.

It’s accompanied by a somewhat artificial engine nose, but it does make for more exciting acceleration. We’d also like wider shift paddles to be fitted behind the wheel; as a performance brand, you expect each part of the driver’s interaction with the car to be spot on. The paddles let it down.

The regular Leon is already a handsome car, so the additions made to it by Cupra have only strengthened its visual appeal. The estate model is particularly appealing, with loads of cuts and angles ensuring that it stands out on the road. At the rear, you’ve got the standard-fit quad exhaust pipes that you’ll find on all manner of Volkswagen Group performance cars, but they do give a hint towards what the Cupra Leon can offer.

Additional Cupra touches include blackened trim pieces and the large Cupra badges both front and rear, while the copper-coloured elements that have decked out previous models from the brand have been kept to a minimum on the Leon. Altogether, it’s a classy but relatively understated-looking affair.

The latest Leon has benefitted from some of the latest in-car tech, which is why the interior of this Cupra feels particularly high-end. The material quality is good, with plenty of soft-touch surfaces used throughout the Leon’s cabin. It helps to generate a feeling of robustness, as if it’ll stand up to plenty of use.

Rear-seat space is good – there’s room for five in the Leon – though middle passengers might struggle for foot room. When it comes to boot space, there’s an impressive 620 litres on offer which can be extended by folding the rear seats down.

In terms of practicality, the Cupra Leon more than delivers. Particularly for those who want to have a car that’s exciting to drive without sacrificing space, it’ll prove quite tempting. 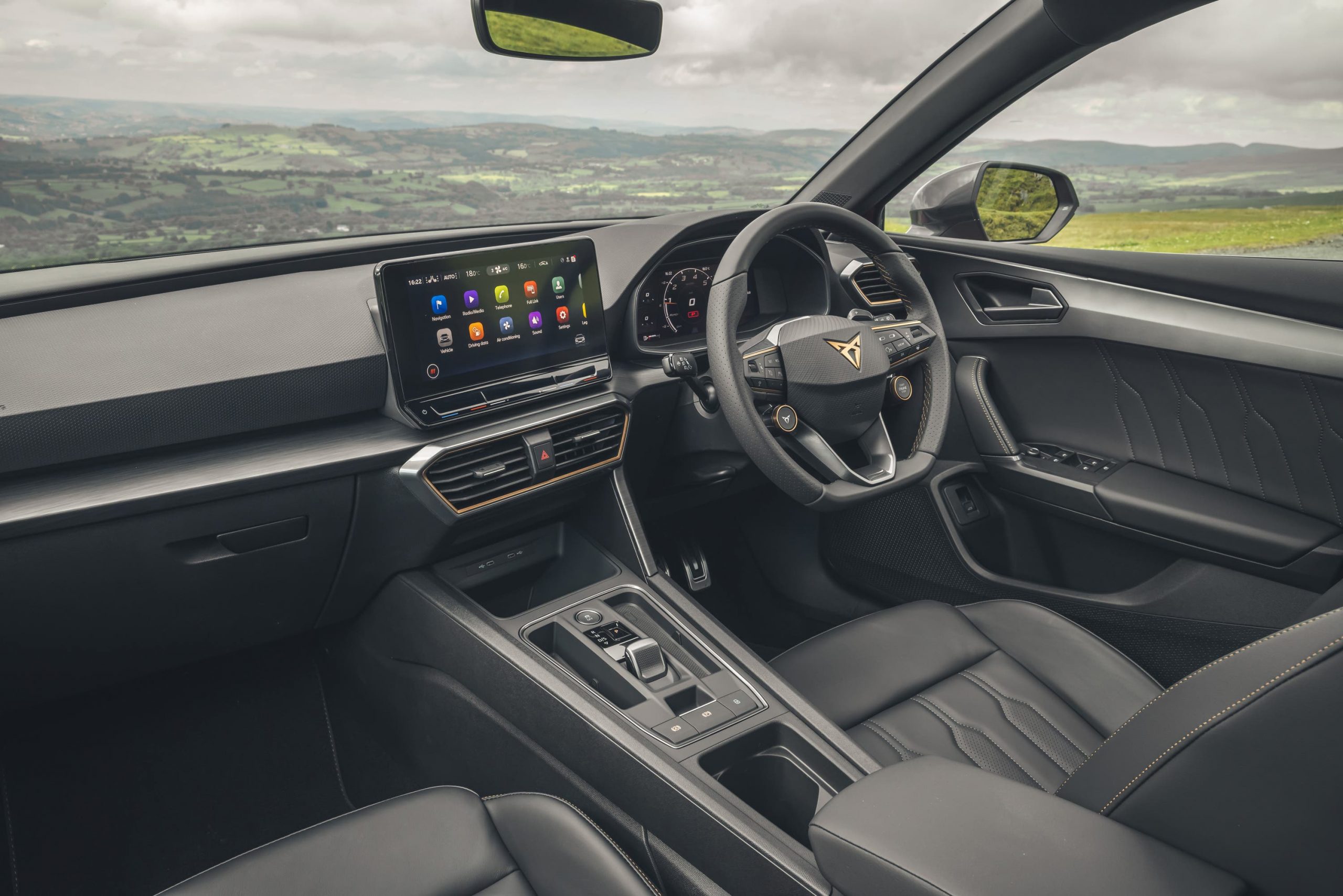 Our test car came in VZ3 specification, bringing a whole range of standard features. Highlights include 19-inch alloy wheels and heated seats, as well as wireless phone charging and a panoramic sunroof – a welcome addition to brighten up the otherwise quite dark cabin.

The main infotainment system is centred around a 10-inch central display. It’s a touch fiddly to operate, with icons and graphics which are ever-so-slightly too small to use on the move. There are no real physical buttons to speak of either, so you have to use the screen in order to access various functions.

The Cupra Leon feels like it could be the perfect daily performance car. It’s got the combination of space and practicality, but it’s got that ever-present turn of pace to add some real excitement to your daily drive. We particularly like the larger boot that you get with this estate version.

It’s cars like the Leon that are working to cement Cupra as a manufacturer proper. Though this might be a Seat-based vehicle, the added premium touches and enhanced performance that this Cupra brings will no doubt attract a lot of fans.