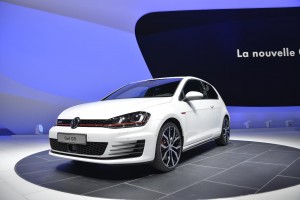 VOLKSWAGEN has revealed the pricing and specification for its new Golf GTI – set to make its way to dealers in summer.

Unlike rivals such Ford’s Focus ST and Renault’s Megane RS, the Golf comes in both three and five door shapes, and is now also available in two different power outputs to boot.

Both versions – a 217bhp standard car, and a 227bhp ‘Performance’ model – are powered by a 2.0-litre turbocharged petrol engine, and can be had with either a six-speed manual or six-speed DSG gearbox.

An upgrade to ‘Performance’ costs £980 and, along with a boost in power, comes with a mechanical limited-slip-diff, and larger front and rear brakes. The only way to tell the cars apart visually, says Volkswagen, is ‘GTI’ lettering on the Performance’s red brake callipers.

The slight power boost does bring with it a marginal increase in speed, too: the standard car hitting 62mph in 6.5 seconds, while the performance manages it in 6.4. Top speed, meanwhile, is boosted from 152mph to 155.

Inside, both cars get all the usual GTI equipment – a bespoke steering wheel, stainless steel pedals, and the classic tartan seat trim. There’s also a touchscreen ‘infotainment’ system as standard, which now includes a DAB radio, and has both Bluetooth and iPod connectivity.

More safety equipment is included than before, too – the GTI now receiving both City Emergency Braking, and Automatic Post-Collision Braking to keep occupants safe prior to, or in the event of a collision.

The new car is cheaper to run, too – now five insurance groups lower than the old car and, with emissions as low as 139g/km, cheaper to tax too.