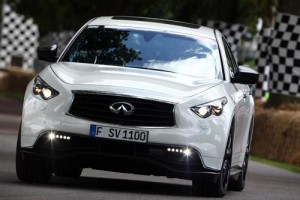 INFINITI has declared it aims to cause disruption in the premium sector in an attempt to win more customers.

The company has bigger plans than ever before to take on established premium brands by offering models that ‘push boundaries’.

The bold statement was announced at the opening of Infiniti’s brand new design studio in London last night.

Infiniti Design London is based in the dramatic ‘Battleship’ Building in Paddington. It’s already the home of Nissan Design Europe, but the creation of a dedicated Infiniti design studio will allow the brand to concentrate on producing cars that take on premium brands head-on.

Alfonso Albaisa, Infiniti executive design director, said: ‘Infiniti has of course had an international design presence since the beginning. But the creation of a dedicated Infiniti design environment is new. It is acknowledgement that the premium sector is extremely competitive and requires 100 per cent focus.’

The London base will be a chief component of Infiniti’s plans to expand its model range by 60 per cent by 2020. The new cars – one of which will be the Sunderland-built Q30 hatchback – will make Infiniti’s offering richer as it aims to appeal to younger customers looking for ‘unconventional’ design.

‘Infiniti is a challenger brand that needs its own space to create the breakthroughs and cause the disruption in the premium sector that we must deliver. The dedicated design studios will allow us to push the boundaries of our passion and imagination further,’ said Albaisa.

The facility has a staff of 20 people, a design studio, a 3D modelling area and engineering facilities.

Infiniti Design London director Simon Cox added: ‘This studio is our own Infiniti world to concentrate on Infiniti and nothing else, but with the backup of a multinational’s resources next door if we need them. It is the right environment to develop products that come with the specific Infiniti feeling.’

Car Dealer, along with a handful of other UK journalists, saw the unveiling of a brand new concept car which will get its official debut at the Paris Motor Show. There will be full coverage of the Paris show in the next issue of the magazine.