Home > News > VIDEO: Nissan creates world’s biggest Zorb – with a car in it! 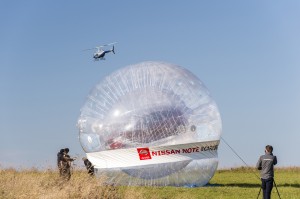 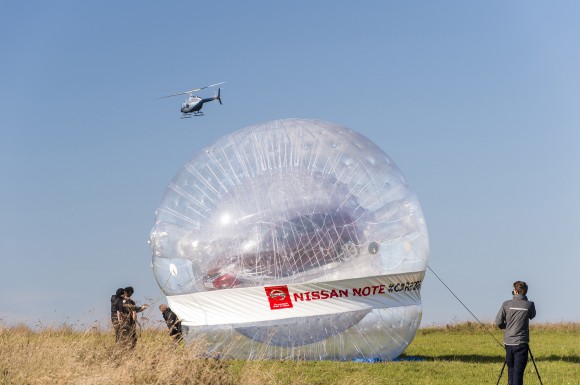 VIDEO: Nissan creates world’s biggest Zorb – with a car in it!

NISSAN has created the world’s biggest working Zorb, complete with a full-sized Note safely cushioned inside.

The giant inflatable ball, which measures six metres in diameter and more than 18 metres in circumference, was constructed to highlight Nissan’s Safety Shield technology featured on the Nissan Note, its popular small family car.

Nicknamed the ‘CarZorb’, the colossal structure was successfully rolled down a course of steep hills in a two-minute film.

Originating in New Zealand, Zorbing sees thrill seekers roll downhill inside an orb made of strong inflatable plastic. The Zorb is usually made of two inflatable layers, shielding the individual inside from outside dangers.

To demonstrate its Safety Shield technology, Nissan took the popular pastime one step further and built a bespoke Zorb capable of holding the Note. The CarZorb was then tested at a top-secret military training facility in the UK.

Nissan’s CarZorb, which took more than two months to build and weighs more than a tonne, was designed to visually represent the manufacturer’s Safety Shield technology – a suite of driver assistance technology to alert motorists to potential hazards.

The stunt comes as the all-new Note celebrates its first anniversary on Europe’s roads.