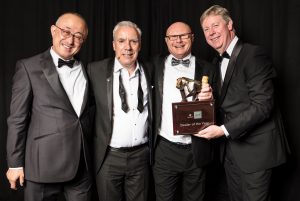 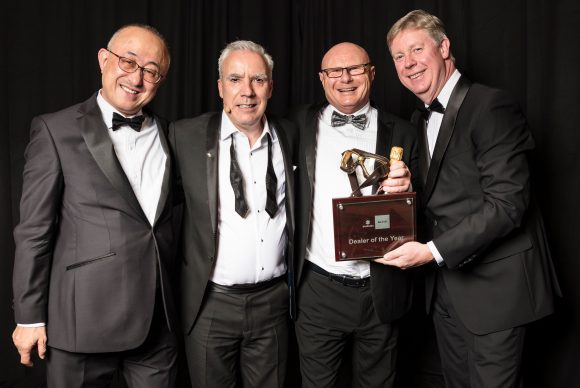 SUZUKI has named the winners of its annual Dealer of the Year Awards.

The prestigious ceremony, held in Tenerife, recognised the achievements of the brand’s UK retailers from the past 12 months.

Prior to the event, all dealerships within Suzuki’s nationwide network were evaluated using the same criteria to determine the regional, national and customer service winners.

They were assessed on the percentage of target sales achieved, finance penetration, customer satisfaction indices, the number of parts sold, and the quantity of accessories sold and returned.

The figures were then aggregated on a balanced scorecard to reveal the top dealer in each of the categories.

The top honour of the night, the National Dealer of the Year trophy, went to Luscombe Suzuki Leeds, pictured, who stepped up on to the stage for the second time during the evening to claim the top prize.

This marked the fourth time that the retailer has won the accolade since taking on the Suzuki franchise in 2010.

The final presentation was made to Norfolk’s Fleming Brothers, who won the individual award for Outstanding Performance in Customer Service for the second year in a row.

The ceremony was completed with a total of 19 dealerships being commended for their long-standing relationship with Suzuki, with two franchises, Colin Appleyard in Keighley (West Yorkshire), and Gordon Motors Suzuki in Crieff (Perthshire), celebrating four decades with the brand.

In addition, three showrooms have reached 30 years of long service, with five dealers across the UK celebrating 20 years of representing Suzuki.

Dale Wyatt, director of automobile at Suzuki GB plc, said: ‘It is an honour to gather together representatives from our showrooms up and down the country, and to recognise their achievements from the last 12 months.

‘We would like to congratulate all of our award winners and the businesses who received honorary mentions during the ceremony. They have each shown exemplary standards of work and service, and without them, we would not be in the strong position that we find ourselves in today as we head into the new decade.

‘Congratulations, and we look forward to enjoying further success together in 2020.’