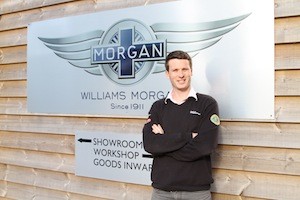 A YOUNG entrepreneur who took control of his floundering family firm has won a national award.

Henry Williams, 29, took the helm of his family business Williams Automobiles three years ago and his turnaround strategy has earned him the title of Worldpay’s Young Entrepreneur of the Year by the Federation of Small Businesses (FSB).

Williams Automobiles has been in Bristol for more than 100 years and since launching in 1911, the business has been passed down through four generations of the Williams family.

After building up the business as a regional, family-owned group representing brands such as Saab, Skoda, Suzuki, Subaru and Isuzu, the business has transformed from a franchised dealer holding Morgan and Lotus franchises.

Williams said: ‘The business has had a rollercoaster of a ride since it began 103 years ago. It survived World War One and Two, but it was the recent recession that hit the business hard. My father wanted to take a step back from the company so I took over the reins and reinvigorated the business. My goal was to bring all the best practices from a larger business to a low-cost, but user-friendly retail environment.’

Three years on, the business turns over £5m a year, has three showrooms and a strong team of 11 employees.

Carol Undy, chairman FSB (Member Services) Ltd, said: ‘Small businesses and the entrepreneurs behind them are what make Britain great. Henry Williams took on the difficult task of dissecting all that was wrong with his family’s firm before throwing his passion and years of knowledge gleaned through working his way up in the business into reviving it. He knew that if he didn’t re-invigorate the business it would ultimately fail.

‘His vision to create a truly customer focused experience by adapting to market conditions and responding to changing needs has created a business model that is both sustainable but ultimately expandable.’