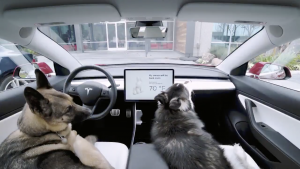 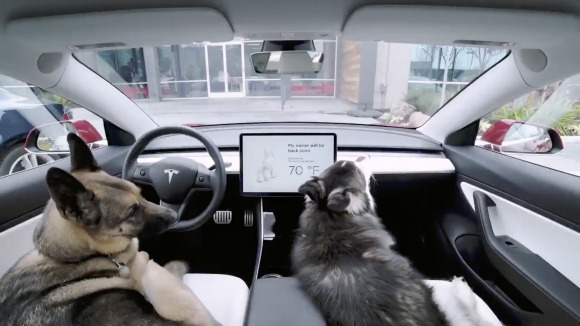 The software update, which has been made available on all Tesla models this week, allows owners to leave the air conditioning on in their cars to keep their pets cool.

However, national animal charities have said they believe that under no circumstances should dogs be left unattended in cars as they could ‘die in minutes’ if the technology failed.

Holly Barber, RSPCA campaign manager, said: ‘Technology can fail and it isn’t worth the risk of injury to your pet to put them in this situation. We would advise owners to leave them at home if they know they are going to be away for a longer time.

‘The RSPCA receives thousands of calls every year about dogs left in hot cars and our inspectors see first-hand the trauma this can cause.

‘Many people think it will be fine just to leave their pets for a minute or two, but we know that this is all it takes for temperatures inside a car to soar to dangerous levels. Our advice is never to leave a dog in a car on a warm day.’

Tesla announced Dog Mode this week. It not only cools the car but also informs passers-by via a message on the infotainment screen that the owner will be returning soon and not to worry.

The mode remains on when occupants leave the vehicle and they receive a notification via Tesla’s mobile app if the car’s charge drops below 20 per cent while Dog Mode is in use.

However, animal charities are not only concerned the technology could fail or be incorrectly set, they also fear that it inadvertently promotes the wrong message to other car owners that leaving a dog in a car is acceptable.

And there it is! 4 months ago I tweeted @elonmusk about the idea of #dogmode and it’s already implemented! https://t.co/IXAw1alcfC

Mark Bossley, chief vet at national pet charity Blue Cross, said: ‘Blue Cross would have serious concerns that this [Tesla] system could lead to complacency with owners that it is OK to leave their dog alone in a car.

‘They could become a target for opportunist thieves and there are dangers in warmer weather, as dogs can die in minutes if left in a hot car. We would never advise people to leave their dog in a car in any situation.’

The idea of a Dog Mode was first suggested directly to Elon Musk last October by Twitter user John Atchely. He said: ‘Can you put a dog mode on the Tesla Model 3. Where the music plays and the [air conditioning] is on, with a display on screen saying, ‘‘I’m fine my owner will be right back’’?’. Musk simply responded ‘Yes’, before announcing the feature’s introduction earlier this week.

A spokesperson for Tesla said: ‘This feature keeps your dog at a comfortable temperature in your car while letting people passing by know that the owner will be back soon.’

MORE: No-deal Brexit ‘would be catastrophic’