Home > News > Carcraft closes down as 500 people lose their jobs

Carcraft closes down as 500 people lose their jobs 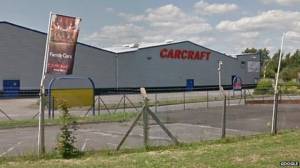 USED-CAR dealership Carcraft – described on its own website as ‘the UK’s leading used car supermarket’ – has closed down.

The dealership, based in Rochdale, has 10 showrooms around the country, and about 500 people have lost their jobs.

A spokesman has told customers with Carcraft policies, including break-down cover, that they would no longer be covered.

Staff at the Rochdale head office were stunned when they were told the news at 10.30am today.

Administrator David Smith said today: ‘With great regret, a conclusion was reached that it is no longer viable to keep Carcraft in operation.

‘In order to prevent further losses, it has been agreed with management and creditors to cease operations with immediate effect.

‘Carcraft will retain a skeleton staff to assist with the realisation of assets. In the event there are any approaches from interested parties, we will react accordingly. It is our intention to explore with an alternative provider whether they could provide the roadside assistance element of the DHP cover at a favourable rate to former customers.’

The media has been told that all employees were paid today for the month of April.

Taurn Mistry, automotive advisory partner at Grant Thornton, said: ‘The business model has failed to evolve with the changes in the used-vehicle remarketing sector and regulatory environment. Overall, this sector is still vibrant and represents a significant opportunity for the appropriate operating model to benefit from the growing and changing used vehicle market.’

Administrators said attempts had been made to sell the business since February, but they have been unsuccessful.