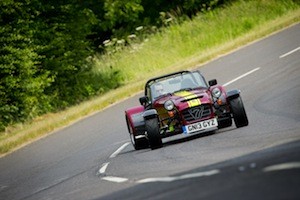 Caterham partners with Revolutions to open dealership in Scotland

CATERHAM has partnered up with Revolutions to open a new dealership in Scotland, where it will specialise in selling the iconic Seven sportscar.

The new showroom, based in Perth, not only establishes a retail hub for Caterham Cars in Scotland but also provides official service and repair facilities for customers in the region.

It will be the third addition to Caterham’s list of UK showrooms with its main dealership and sales headquarters recently moved to a new site in Crawley, West Sussex.

The firm says its new partnership with Revolutions is the next step in developing the market for Caterham in Scotland and the north of England, as it aims to expand its delivery of ‘accessible fun’.

The Revolutions team has expertise in retailing British-made sportscars and the 8,000 sq-ft facility will allow customers to order any Caterham Seven from the current range including the latest Seven 620R model. It will also house selected pre-owned and new vehicles.

‘It is a great feeling to be bringing Caterham Cars to Scotland,’ CEO of Caterham Cars, Graham Macdonald, said. ‘Partly because it’s where I hail from, but also because it makes good business sense too; we know there is demand from sportscar enthusiasts in Scotland.

‘On top of that, customers won’t have to travel so far for maintenance, a test drive or to place an order.’

He added: ‘We believe the Scottish market represents untapped potential for Caterham and, as we extend the brand globally, we are not forgetting our customers closer to home.’