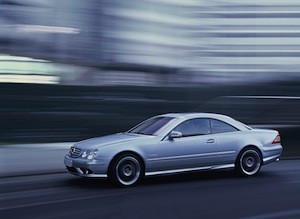 A LAMBORGHINI dealer in Atlanta has set a new record after driving a Mercedes CL coast-to-cast in less than 29 hours.

Ed Bolian and his two co-driving friends averaged at 98mph across the 2,813.7-mile trip in the Mercedes – the car he spent years kitting-out with spare fuel tanks and technical gadgets in order to keep an eye out for the police.

They took the classic route from Midtown Manhattan in New York to Redondo Beach in Los Angeles, which was first driven in the Cannonball Baker Sea-To-Shining Sea Memorial Trophy Dash in the 1970s.

Their record time of 28 hours and 50 minutes beats the previous record set by Alex Roy in 2006 at 31 hours and four minutes.

According to the automotive website Jalopnik, the 27-year-old had dreamed of breaking the record since he was a teenager, which he finally did on October 19. Bolian told Jalopnik: ‘I’ve wanted to break the record since I was 18 years old.’

On board the car was a police scanner, two GPS units and iPhone apps such as Trapster, while friends of Bolian also travelled the route, roughly 150 miles ahead of the Mercedes to check for potential obstacles.

The car was also fitted with two laser jammers and a truck-mounted antenna, in order to prevent police cameras from clocking the 98mph speed. Bolian chose the Mercedes CL for its fuel economy and active suspension to handle the additional fuel tanks.

‘I thought about a Ferrari 612,’ he said. ‘But gas mileage would’ve been bad. A Bentley would’ve been perfect, but you’d want the V8 for gas mileage, and those are still way too expensive.’

He added: ‘You need active suspension. You know, for the fuel tanks.’

Bolian actually sought advice from the former record-holder, Alex Roy, on how to prepare both himself and the car for the trip. He said: ‘Every year, Alex hears about five to seven attempts to break the record. None of the challengers come close.’