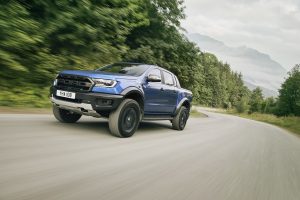 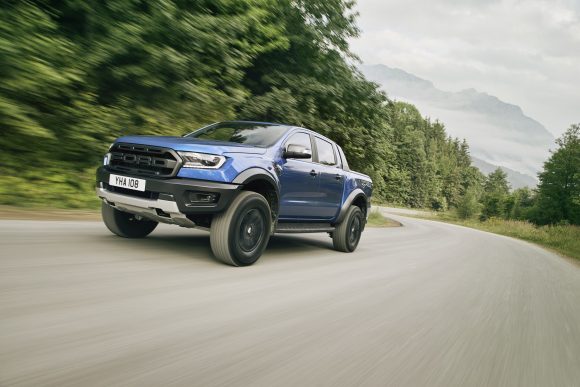 Volkswagen and Ford have signed an agreement to share production of eight million commercial vehicles.

News of the potential tie-up was announced in July 2019, but only now have the two manufacturers shaken hands on the deal.

Starting as early as next year, they will produce a new city van based on the latest VW Caddy. This will be followed by a one-ton delivery van made by Ford and a new pick-up.

As lead partner, @Ford will in 2022 produce the new version of the Amarok for #VWCommercialVehicles based on the Ranger. For Ford, we are going to develop and build a city delivery van, based on the #Caddy5. #VWGroupxFord pic.twitter.com/zh6VMXGjz1

The new Ranger truck will arrive in 2022 and will also be built as the Volkswagen Amarok – replacing the last Amarok that went off sale last year.

The partnership will extend beyond commercial vehicles, however, to include a new Ford electric car.

Arriving in 2023, the new Ford EV will use Volkswagen’s MEB platform – which is getting its first airing this summer with the ID.3 hatchback – and will give Ford a much-needed foothold in the burgeoning electric car market.

Using VW’s MEB platform, Ford believes it can shift as many as 600,000 vehicles, but the Blue Oval is keen to point out that the new EV will be designed and engineered by itself. 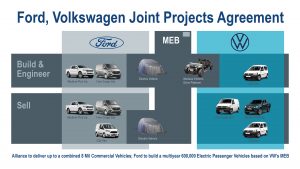 In recent years, Ford has only had the Focus Electric as a full EV, but it has latterly revealed electrified versions of its key models along with the all-electric Mustang Mach-E SUV. Deliveries of that car have been pushed back to 2021.

Meanwhile for Volkswagen, the tie-up – and in particular Ford using its MEB platform – will mean billions in cost efficiencies.

The deal also includes increased investment by Volkswagen in Argo AI – an electric vehicle start-up of which  Ford owns a majority stake.

The partnership doesn’t include cross-ownership, so Ford and Volkswagen will remain rivals in the marketplace.

Volkswagen Group CEO Herbert Diess said: ‘In light of the Covid-19 pandemic and its impacts on the global economy, more than ever it is vital to set up resilient alliances between strong companies.

‘This collaboration will efficiently drive down development costs, allowing broader global distribution of electric and commercial vehicles, and enhance the positions of both companies.’

Ford CEO Jim Hackett said: ‘This alliance comes at a time of tremendous enthusiasm about the intersection of increasingly intelligent, connected vehicles in an ever-smarter world.

‘This creates a huge opportunity to innovate and solve many of the world’s transportation challenges and deliver extraordinary benefits to customers – even as companies need to be selective about how they use their cash.’