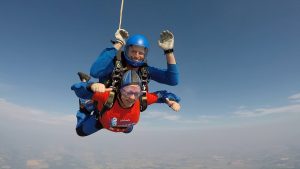 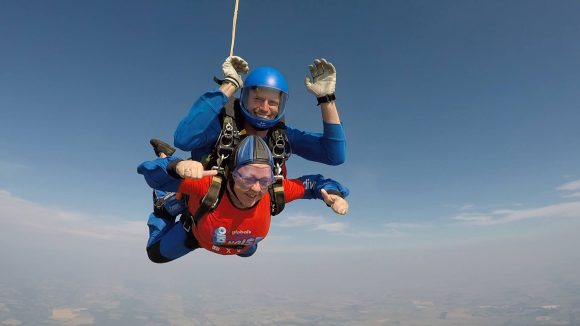 A SENIOR executive at CarShop has taken the plunge to raise money for the supermarket group’s charity partner.

People director Fiona Cottle raised more than £1,500 for Global’s Make Some Noise by leaping out of a plane at 10,000 feet for the tandem skydive, during which she experienced freefall for around 30 seconds and reached speeds of 125mph.

She said: ‘Completing the skydive was a double achievement for me – I managed to fulfil a lifelong ambition to jump out of an aeroplane while also raising money for a fantastic charity.’ 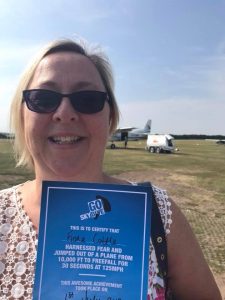 The Wiltshire skydive was originally set for May 28 but got pushed back twice because of weather conditions, finally taking place on July 1.

‘The jump itself was totally exhilarating, and although I have to admit to some nerves, overall it was a fantastic experience and I’m really glad that I pushed myself to do it!’ she said. ‘It was a glorious day and the views over Salisbury Plain were incredible.’

The CarShop Cares programme aims to raises £80,000 by the end of the year for Make Some Noise, which helps youngsters and their families living with illness, disability or lack of opportunity. Employees are taking part in Wolf Runs and Tough Mudders as well as a Land’s End to John O’Groats cycle challenge to name a few of the endeavours.

Cottle added: ‘My colleagues, family and friends were all extremely generous with their sponsorship and I managed to raise over £1,500, which I know will be put to great use helping children and young people who need it.’

To donate, visit her fundraising page at https://carshopcares2018.everydayhero.com/uk/fiona-s-fear-factor

On WorkshopMagazine.co.uk: West Yorkshire fuel fraudster jailed for three and a half years