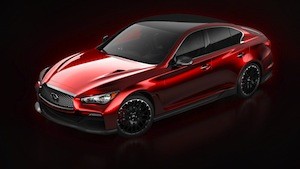 INFINITI has revealed a sneak preview of its Q50 Eau Rouge concept, which will have its world premiere at the 2014 Detroit Auto Show later this month.

The Q50 Eau Rouge is based on Infiniti’s current Q50 premium sports saloon and will benefit from a number of aerodynamic design features, which have been developed in technical collaboration with four-time Formula One World Champions Infiniti Red Bull Racing.

The Infiniti design team, led by executive design director Alfonso Albaisa, said: ‘The design has a number of distinctive Formula One inspired touches. In particular, the sculpted front wing assembly and the rear aerodynamic packaging take their cues from the RB9 race car.’

The high-performance Q50 will benefit from redesigned carbon fibre bodywork components and is notably lower and wider than the standard Q50 – only the roof and door profiles remain untouched for the production model.