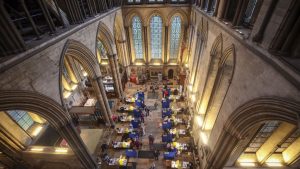 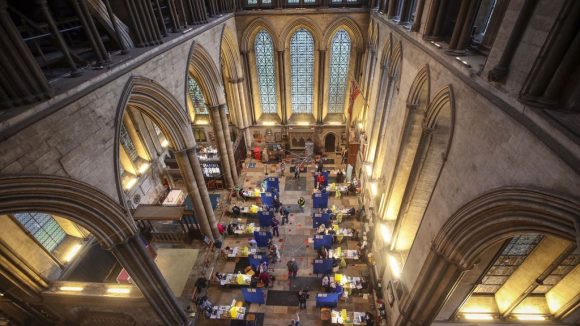 The government’s target of vaccinating two million people a week against coronavirus appears to be on track as more than 324,000 doses were administered in the space of 24 hours.

More than 3.5m people in the UK have now received their first dose of a vaccine, according to the PM, with hundreds administers at Salisbury Cathedral, pictured above.

The prime minister tweeted: ‘We’ve given over 3.5m vaccine doses to protect against Covid-19, with over 324,000 doses yesterday (Friday) alone.’

Boris Johnson will host the G7 summit at the Cornish seaside resort of Carbis Bay, where he will urge of world leaders to unite in ‘building back better’ from coronavirus.

Incoming US president Joe Biden is expected to attend the event starting on June 11, as well as the other G7 leaders from Canada, France, Germany, Italy, Japan and the EU.

The prime minister has also invited Australia, India and South Korea to attend as guests, as he seeks to promote a green recovery from the crisis.

In what was revealed to be a $50bn (£40bn) deal, it will begin trading on three European stock markets and the New York Stock Exchange next week.

Stellantis will be able to produce 8.7m cars a year and create five billion euros annually.

The aviation sector ‘urgently’ needs support from the government as the UK’s airports face ‘near-complete shutdown’ due to the closure of travel corridors, industry groups have argued.

Karen Dee, chief executive of the Airport Operators Association, said: ‘Airports are currently keeping their infrastructure open to support vital and critical services, such as post, freight, emergency services, military and Coastguard flights, as well as to help keep the lights in the UK on through supporting flights to offshore oil, gas and wind operations.

‘Airports are doing so while running on empty – there is only so long they can run on fumes before having to close temporarily to preserve their business for the future.’

In his first hours as president, Joe Biden plans to take executive action to roll back some of the most controversial decisions of his predecessor and to address the raging coronavirus pandemic, his incoming chief of staff said.

The opening salvo would herald a 10-day blitz of executive actions as Biden seeks to act swiftly to redirect the country in the wake of Donald Trump’s presidency without waiting for Congress.

On Wednesday, following his inauguration, Biden will end Trump’s restriction on immigration to the US from some Muslim-majority countries, move to rejoin the Paris climate accord and mandate mask-wearing on federal property and during interstate travel.

Deliveroo has been valued at more than $7bn (£5.1bn) following a new funding round and ahead of a potential stock market flotation.

The takeaway delivery firm raised more than $180m (£132m) from existing investors in a round led by Durable Capital Partners and Fidelity Management & Research Company.

The latest funding comes after the company announced plans to expand into around 100 new towns and cities across the UK in 2021.

England and Wales will mostly see dry, sunny spells on Sunday, according to the Met Office.

North-western regions are expected to see showers, with some more persistent rain later on in the day.

It will start cold and icy but for most of the country it’ll be warmer than Saturday with highs of 9C in the afternoon.