The Defender Works V8 Trophy harks back to the Land Rovers that took part in the famous Camel Trophy runs held between 1980 and 2000.

Under the bonnet lies one of Jaguar Land Rover’s 5.0-litre supercharged V8s and the Works V8 Trophy also gets upgraded suspension and brakes, underbody protection and rugged off-road tyres. 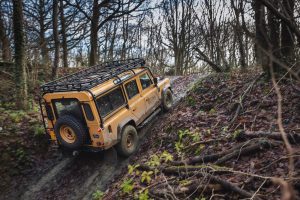 Inside, the Defender boasts Recaro sports seats trimmed in black leather with contrast yellow stitching, while in the middle of the dashboard sits Land Rover Classic’s own infotainment system with navigation and smartphone connectivity.

Dan Pink, director, Land Rover Classic, said: ‘The Land Rover Defender has always been more than just a vehicle, its engineering capability and suitability for overland expedition and all-terrain competition means it’s renowned with getting away from it all. The new Land Rover Trophy will bring this to life for a new generation of adventurers.”

The Land Rover Trophy will see owners take part in a series of challenges inspired by famous global adventures. Each driver will compete for a range of prizes, with the grand prize for the overall winner announced later this year.

Both 90 and 110 wheelbase Defender Works V8 Trophy derivatives are available to order now, with prices starting from £195,000 for the 90.

What used car stock was hot at the start of 2021 as the third lockdown took hold?