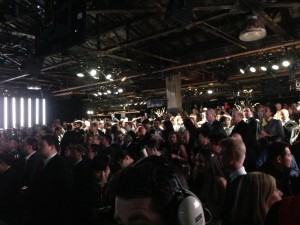 The huge throng of bodies at the Range Rover Sport launch

AS new car launches go this was by far and away the most extravagant I’ve ever been to. In fact it didn’t feel like a new car launch at all – it felt like The Brits.

The red carpet, the celebrities, the helicopters flying overhead – it was all very James Bond. Which was rather fitting as that was just who Land Rover had on hand to unveil their new Range Rover Sport and help them steal the New York motor show on the eve of the actual event.

The huge live launch – that took place in a third of New York’s main post office, which JLR had paid to overrun – was the end to a day that saw the British company show the world how new car unveilings should take place.

With a rumoured £3m budget for the launch, a Hollywood director was commissioned to produce a film of the new Sport called ‘The Delivery’. It saw a car packaged up in Solihull and delivered to the States where Daniel Craig would deliver it the last few miles to the live launch.

And that he did. The whole thing ran like clock work. The film kicked off in the huge Post Office, played to hundreds of media, celebrities and what felt like the world’s paparazzi corp. On a separate note, I never knew just how smelly the paps were until one’s dripping left armpit connected directly with my right nostril. Gross.

Still, I didn’t let this unpleasant perspiration experience ruin the evening. As the video played, you could genuinely feel the crowd getting more excited – such is the potent concoction of 007 and that new car smell.

The cool video synced perfectly with Bond’s arrival on the closed streets (during rush hour, no less) and he drove it slap bang into the middle of the stage to typically-American whooping and cheering. It was the way new car launches really should be done.

The sheer size of the JLR presence here in New York is on a whopping scale. Media have been flown in from around the world, as have executives, and it’s clear just how important this new car is to the team.

But it’s not all Land Rover. Oh no. This is a joint event with Jaguar, so we were treated to a few big cat treats earlier in the day too. As you may well of read on this site yesterday, the maker took the wraps off the XKR-S GT – a special racer for the road with a wing that could almost certainly make an Escort Cosworth red with envy in the shower.

Unfortunately only 30 are set to be built, with 25 going to the States and five to Canada. None for the UK… yet.

A chance drive back to our hotel with a Jaguar spokesman confirmed there could be some made for the UK. Apparently right-hand drive wouldn’t be a problem and if there were four or five interested parties it would make financial sense too.

But the really interesting thing was this probably won’t be the last really mad Jaguar – the spokesman confirmed others were being planned too and that the racing division that made the XKR-S GT had been tasked with others. Fruity.

So that’s it for another day in the States. The place really is incredible and as breath-taking as you’d imagine – hopefully I’ll actually get to see some of it on Wednesday, rather than sit here with my head buried in my laptop. It’s press day for the show, so I’ll bring you more blog-age when I can.