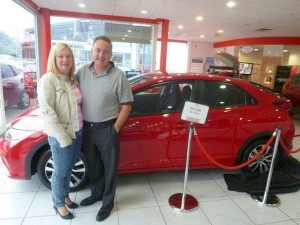 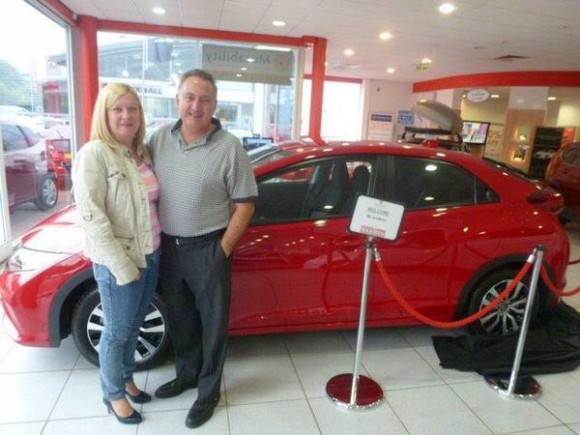 Now we’re 64! Customers arrive to pick up their cars on plate-change day

IT’S one of the two most important dates in any car showroom’s calendar – plate-change day.

And dealerships up and down the country seem to be enjoying a busy spell of activity as customers arrive to pick up their sparkling new cars.

Among the first to receive their new vehicle were customers Mr & Mrs Lathan (pictured) who picked up a new Civic at Honda Durham, part of the Vertu Motors Group.

Sales manager Chris Short told us: ‘Things have been pretty busy so far, although the March plate-change was busier for us this year. That’s also likely to be the case next year with the timings of the new product coming through.

‘We have got quite a few cars going out today though so things are pretty positive. There are some good offers and deals on at the moment attracting people to the Honda brand.’ 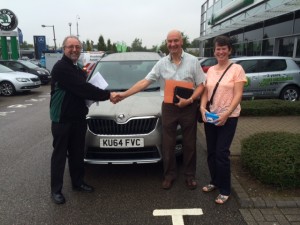 Chris is part of a seven-strong sales team at Honda Durham, with five sales executives and a business manager all playing their part in driving sales forward.

At Lancaster Skoda, Milton Keynes, Mr and Mrs Tearle picked up a new Yeti from Keith Giddings – one of 12 new vehicles going out today from the dealership.

Twitter was full of news of dealership activity today with businesses reporting that dozens of happy customers were taking to the road in new cars.

Derby Seat had put 10 new cars on the road by 9am!

And the Greenhous Group, which operates across Shropshire and the West Midlands, was also busy with customers calling in to collect their vehicles.

as well as operating an extensive bodyshop network.

The Seward Group, serving the Portsmouth area in south-east Hampshire, had a hectic time, completing 17 handovers during the course of the day. 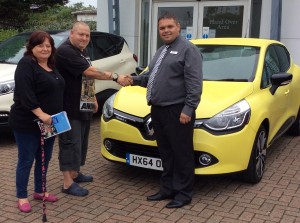 Among the customers receiving their new cars were Tracey and Robert O’Neill (right), who took possession of a new Renault Clio from sales executive Rob Sanderson.

Meanwhile Blackshaws counted the ’64-reg’ to be a resounding success.

Boss William Blackshaw told us: ‘We have 60 orders for 64-reg. Among the customer deliveries on September 1, we handed over a new car to my mum!

‘This has been our best start to a September and also a March, so we are forecasting a record month for units. I am confident the year will continue to be a success and I think the manufacturers have confidence in volume allowing stronger deals to be offered.’

@BristolStMotors @vertumotors Sam beats his wife to collect his new car, she collects her at 1 #64plate pic.twitter.com/rbaSJkHwYU

Shortly after 9am, Alan Day Volkswagen handed over a 64-reg Up to a delighted Mr Lawson

First deal of #transferdeadlineday is done as Mr. Lawson completes the signing of his brand new ’64 plate up! Enjoy! pic.twitter.com/LryxtPdFwM

You have to be quick to get the first 64 plate @MINIUK …. @miniwesterly must have been close! pic.twitter.com/w9F56cTWlm

First day of the 64 PLATE…and we’ll be handing over, over 60 brand new cars! #happymonday pic.twitter.com/Xetmefb2AM