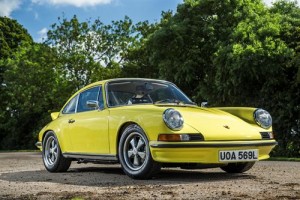 THE Porsche 911 RS Carrera has topped the list of the fastest rising classic car investments of the last 10 years with its value increasing by a whopping 669 per cent.

Classic car expert and market analyst Dave Selby undertook the research to mark 10 years of the Discovery Channel show Wheeler Dealers. It revealed that the popular Porsche’s value has shot up to £500,000 from £65,000 in 2004.

A Discovery Channel spokesperson said: ‘From the much coveted Aston Martin DB5 to the humble Fiat 500, classic car owners across the UK are sitting on a small fortune, thanks to the boom in the vintage car market over the last decade.’