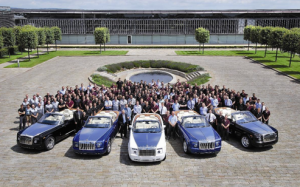 ROLLS ROYCE will soon struggle to keep up with demand, the firm has suggested, with its Goodwood Factory unable to expand into conservation area.

The luxury car maker says that production of the Phantom and Ghost will eventually become restricted by the size of its West Sussex-based factory – the site being unable to grow because of the protected land that surrounds it.

‘We made more than 3,500 cars last year,’ Chief executive Torsten Müller-Ötvös told Headline Auto, ‘but eventually we will be restricted in terms of expansion because the factory is in a conservation area.’

‘There are no plans to open another plant in the UK so ultimately volume will be determined by the size of the plant.’

The lack of another factory, says the firm, comes down to the ‘heritage’ of the Goodwood site it currently occupies – with Müller-Ötvös suggesting that production elsewhere in the UK is simply ‘not what our customers expect.’

Although the site occupies nearly 250,000 square feet, and has been expanded twice since its 2003 opening, it’s the painstaking process of assembling each Rolls Royce that means just a handful of cars can be produced per day.

Each car takes around 500 hours to produce, while vehicles that require bespoke work – not unusual for the firm – can take as many as 800.

‘While entry to the brand is around £200,000, spending over a million on one of our cars is not expensive to our customers,’ said Müller-Ötvös.

‘Our customers are very demanding, they nearly always want to add their own touches and every one of the Phantoms we build is bespoke as are 70 per cent of Ghosts – we expect the same from the Wraith.’