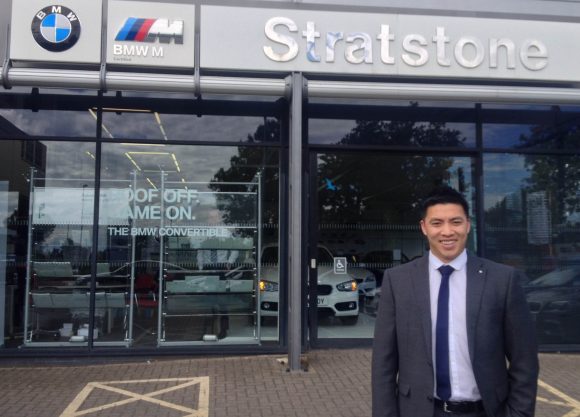 AN enterprising BMW salesperson has gone above and beyond the call of duty by delivering first aid to an elderly woman who called the dealership by mistake.

According to a Facebook post, Sara Tweedy’s grandmother had a fall at her home in Tyneside on Sunday and tried to call her daughter. However, in her haste and confusion, she accidentally phoned through to Stratstone Tyneside BMW.

Rather than treating the enquiry as a wrong number, Dang Vuong, the New Car Sales Leader, recognised that the woman needed pretty urgent help. Taking down what details he could, he hopped into his car and went round to help her out.

In her post, which currently has more than 29,000 Likes, Tweedy said: ‘The manager got in his car and went straight to her house where he found her on the floor and her bath which was almost ready to overflow. He picked her up and cleaned her mouth which was cut and was able to contact us through her Mobile while he stayed with her until my Mam got there.’

Vuong told us: ‘I got her house number and street – I had to Google it for the postcode because she couldn’t remember. I quickly jumped in the car and away I flew. Thankfully it was only 2-3 minutes away from where we were.

‘I heard her in the living room – I could just see her feet through the door. I checked with her if she was alright and she tried to get up so I scooped her up and put her on the sofa. I made her a cup of tea – cups of tea make everything better!’

After making sure everything was okay, Vuong contacted Sara through her grandmother’s mobile phone, who sent her mum and dad and carers round a few minutes later.

Sara’s grandmother wasn’t seriously injured in the fall, but Vuong’s actions helped in making sure that the situation didn’t get any worse.

‘Hopefully it restores a bit of faith in humanity for everyone out there – not to pass the buck onto anybody else,’ added Vuong.

David Guy, Head of Business at Stratstone Tyneside, said: ‘I’m so proud of Dang for his selfless act of kindness, he is just the nicest person you could ever meet and I’m proud to say he works for me. He is always doing things for other people so what he has done just does not surprise me in the slightest.

‘It would have just been easy for him to have called 999 and just moved on with his day which I believe anyone else would have done, but Dang being Dang jut did what comes natural to him, helping others!’