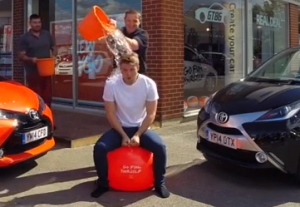 IT’S the decidedly chilly craze that’s taken the world by storm – and car sales teams up and down the UK have been getting involved in the ice bucket challenge.

Among the dealerships to join the fun today was Yorkshire-based Burrows Toyota, where Ben Lowe had not one, two or three buckets of water thrown over him – but 20!

His colleagues were merciless as they repeatedly soaked him in the drive to raise money for Macmillan Cancer Support.

As Burrows’ video specialist, Ben recorded the event himself before editing his film and uploading it to YouTube this afternoon.

He told Car Dealer: ‘I worked on the video straight afterwards – and the ice bucket challenge was unbelievably cold. I’ve never felt something so cold in my life. I can’t describe it. To have one bucket of ice cold water poured over you would be bad enough but 20 was a bit far! It was for charity though, so it was a good thing to do.’

As Burrows’ video man, Ben organises and presents walk-rounds and publicity films of cars made by the franchises the company works with, such as Hyundai, Fiat, Mazda and Kia. He mainly works at the company’s sites in Sheffield, Wakefield and Barnsley.

To make a donation, check out Ben’s page on Just Giving.