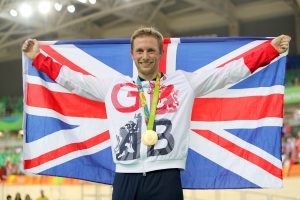 A CAR dealership boss called Jason Kenny is being mistaken for the British Olympic cycling champion of the same name – and is receiving dozens of messages of congratulation on social media.

Kenny, aged 46, comes from the same part of Manchester as his sporting namesake – and says cycling is a hobby of his – but has amended his Twitter account to make it clear he is not an Olympic gold medal winner.

In fact, he is general manager at Perrys Bolton, and although can’t claim to be a sporting hero, has certainly performed well in his chosen profession, saying on LinkedIn that he has taken a poorly performing dealership from a huge loss to a good profit – with a swing of nearly £500,000 in just five years.

The Perrys Bolton site has almost 50 staff including a sales team of nine people, a service department with an aftersales manager, seven technicians, two service

advisors and a warranty administrator.

Quoted on the Daily Mail website, Kenny said it was an ‘absolute pleasure’ to receive the cycling champion’s tweets.

He added: ‘It has happened for years and first started when he was at the Beijing games, then obviously London and now Rio.

‘I usually just re-tweet them or sometimes I reply and say thank you but I am not in Rio. I find it funny.

‘We had an open day at the garage and we put on the invites that Jason Kenny would be on site to meet people. People were turning up asking could they meet Jason Kenny so they were a bit disappointed when I stepped out – they must have thought I’d really let myself go!’

Over in Rio, the other Jason Kenny kept his cool to win a stunning sixth gold last night and his fiancee Laura Trott won her fourth as Great Britain dominated the Olympic Velodrome for a third successive Games.

MORE: Lookers reveals an ‘excellent’ set of results for the first half of 2016