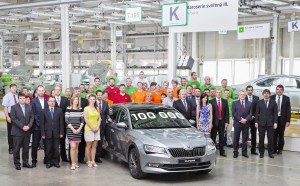 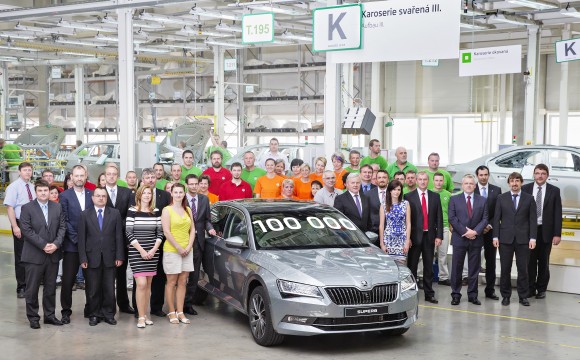 THE 100,000 third-generation Skoda Superb has rolled off the production line in Kvashiny.

Production of the new model began in March 2015 and the milestone vehicle ran off the assembly line on May 11, 2016, following substantial investments and employees recruitment at the plant.

Since the model was first introduced to the range in 2001, the Czech manufacturer has produced more than 850,000 Superbs and the production capacity at Kvasiny has been expanded and modernised for the production of the brand’s flagship model.

Michael Oeljeklaus, Skoda Auto board member for production and logistics, said: ‘The production of this highly modern car is a testament to the outstanding competence of the Kvasiny plant and its employees.

‘The name Superb represents one of the best and most successful models in the automotive mid-class. This third-generation model will continue the Superb’s success story in the coming months and years.’

Since 2001, the Skoda Superb has topped Skoda’s range. This ties the Czech automaker to its tradition of prestigious vehicles such as the Laurin & Klement FF dating back to 1907, which was the first eight-cylinder model in Central Europe.

Similarly, in the 1920s, the first president of Czechoslovakia Tomas Garrigue Masaryk owned the Skoda Hispano-Suiza, the eight-cylinder Skoda 860 rolled into life in the 1930s, and in 1934 the first ‘Superb’ rolled off the production line: the Skoda 640 Superb.

At the Kvasiny plant, the manufacturer made significant investments ahead of the arrival of the the new Superb. A total of CZK 1.7 billion (£49 million) went into the new body-construction line alone, while the site is being prepared for the brand’s SUV campaign.

By 2018, Skoda intends to invest a total of CZK 7.2 billion (£210 million) into Kvasiny and create 2,000 new jobs. The production capacity will be gradually increased to 280,000 vehicles annually. Kvasiny is one of Skoda’s three production sites in the Czech Republic, employing more than 5,000 people, and is one of the largest industrial employers in the Hradec Králové region.