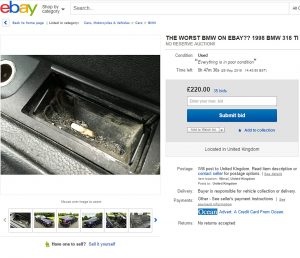 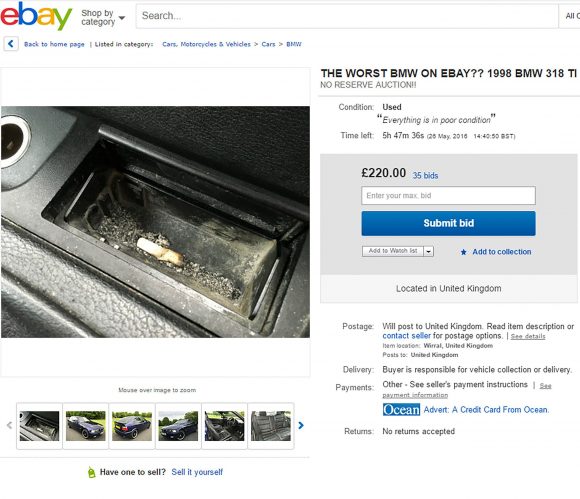 The truth hurts! A brutally honest car ad penned by a desperate dealer

WHEN a car dealer in Merseyside found himself struggling to sell a BMW in desperate need of TLC, he resorted to publicising a brutally honest advert about the car’s condition.

Richard Harris, sales manager at Classic Cars in Wirral, was so shocked by the state of the trade-in 1998 BMW 318 that he struggled to find any positive features about the vehicle.

Consequently, he labeled it as a rusty ‘chav chariot’ and a ‘piece of crap’.

In the advert, listed on eBay, Harris admitted that the 318 was fitted with tyres that ‘come from countries that no longer exist’ and a loud exhaust ‘that sounds like a fart in the bath’.

He said he wanted potential buyers to ‘grasp the full horror of the car’s condition’.

Listed as ‘the worst BMW on eBay’, and accompanied by a wealth of images, the 318 racked up more than 35 bids for £220.00 on the auction site – pretty impressive for a car of little value.

In the ad, Harris said: ‘I’m not sure I have the time or inclination to go through the full ins and outs of this piece of crap, so if in doubt please presume all parts of the car are either broken, rusty, or covered in some kind of dubious residue. That way you won’t be disappointed. Actually you probably will.’

Harris also informed bidders than ‘it looks like someone has painted the original headlining matt black and then eaten their dinner off it’.

He told the Daily Mail: ‘The wording of the advert comes out of the frustration of people’s high expectations of unloved, abused cars they have bought. I just needed to make sure they grasped the full horror of this car’s condition, and aroma.

‘Based on the views we’ve got, we’ll probably do more ads like this in the future. Honesty is the best policy.’

We’ll announce the grand total the 318 sold for as soon as we receive the details.

‘Just 15 owners from new!! Are you ready to be lucky number 16? I’m not sure I have the time or inclination to go through the full ins and outs of this piece of crap so if in doubt please presume all parts of the car are either broken, rusty, or covered in some kind of dubious residue. That way you won’t be disappointed. Actually you probably will.

I have added as many photos as possible to give an insight into this cars overall condition and appearance. Other points to note are the texture of the headlining. This was described to me as a special acoustic material designed to enhance bass at a cost of £300. To me it looks like someone has painted the original headlining matt black and then eaten their dinner off it. Other than the fact that the leather is in good condition the interior is generally not a nice place to be.

Externally there is rust/damage to most panels. While the front wings may look like they are securely attached to the car they are in fact flapping gaily in the spring breeze that we have today. They may break free at any time. The wheels, while giving the impression of a Nurburgring race car are disappointing in appearance and add nothing to the aesthetics of the car. When selecting tyres the previous owner used the thinking that variety is the spice of life.

They are all of various wear levels and some of the countries they have come from no longer exist so please presume they require replacement. Pressing on with the virtual tour to the engine bay it is clear that the person who maintained the cars physical appearance has used much the same skill set with the mechanical upkeep of this article. The cold air induction kit has been installed by a deranged chimp with a gun to his head such is the panache and engineering consideration involved. It has a loud exhaust that sounds like a fart in a bath.

When starting this machine one has to operate the ignition switch and steering lock separately. I’m not going to lie, this is a right pain in the arse. You can only unlock the car on the passenger door and only lock on the driver’s door. This is an equal pain in the arse.

We have the V5, 1 disgusting sticky key with a broken case and a CLEAR HPI CERTIFICATE!! I KNOW!! I was surprised too!!’