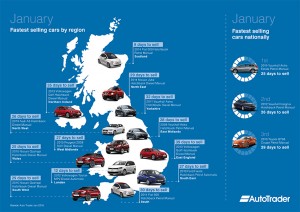 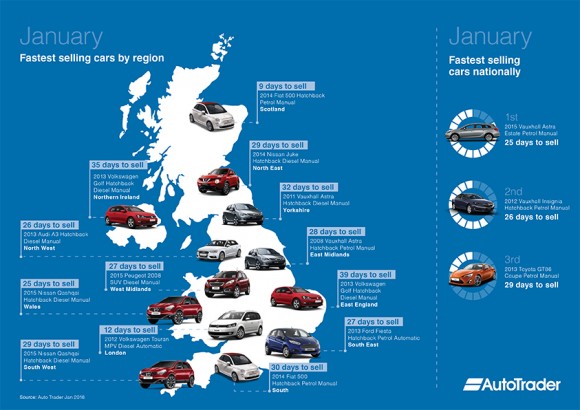 AUTO TRADER, which operates the UK’s largest digital automotive marketplace, has announced the top 10 fastest selling used cars in January 2016, with Vauxhall, Toyota and Volkswagen topping the leader board.

The Ford Fiesta, the fastest selling used car of 2015, dropped out of the national top ten this month, but featured in nearly every regional list, dominating the top ten in Northern Ireland with four different variants of the ever popular model.

Drivability and practicality were paramount concerns amongst buyers nationwide as nine out of the top ten vehicles were sold with manual transmissions, and six of the top ten were larger model variants –specifically estate, SUV and MPVs. The recent drop in diesel prices did not seem to be a factor, however, with an equal split between petrol and diesel vehicles.

Meanwhile, Nissan models continued to be popular amongst UK car buyers, appearing in nearly every regional top ten. The hugely successful Qashqai featured three times in the top ten for London and topped lists in South West and Wales. Other models, namely the Note, Juke, Micra and X-Trail, appeared multiple times in many of the regional top ten lists, especially in the North East, home to the Nissan factory in Sunderland.

The Fiat 500 also appeared in nearly every regional top ten list, topping lists in Scotland and the South, while customers in the South East were eagerly preparing for some winter weather as they snapped up Land Rovers – four models appeared in the regional top ten, with the Discovery featuring twice.

With competitive finance deals available, the online trend is moving towards more aspirational vehicles when searching for a car. However, the fastest selling used sales results still favour practicality.

Auto Trader estimates that more than 52 per cent of all cars on the classified website are not well matched to local demand. The company’s forecourt management tool, i-Control, gives dealers a better than 50 per cent increase on stock turn, with those using the tool turning stock within 36 days on average in January, compared to a whole market average of 73 days.

Forecourt management tools such as i-Control can track live market movements, recommend stock to buy, where to find it, how much to pay and how much to sell it for, taking into account regional differences in supply and demand.

Karolina Edwards-Smajda, Auto Trader retailer and consumer products director, said: ‘The start of a new year is always a busy time for Auto Trader, and thanks to our latest TV advert, traffic to the site has increased, and as a result, adviews have been considerably higher than this time last year.

‘It is also very positive to see that i-Control is continuing to halve the time dealer stock is sitting on forecourts for. By providing insight into live market pricing trends and regionally desirably, retailers are able to source stock knowing there are buyers ready to buy in their local area.’