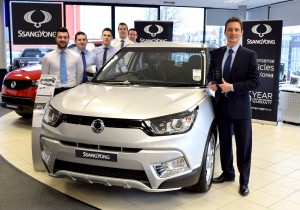 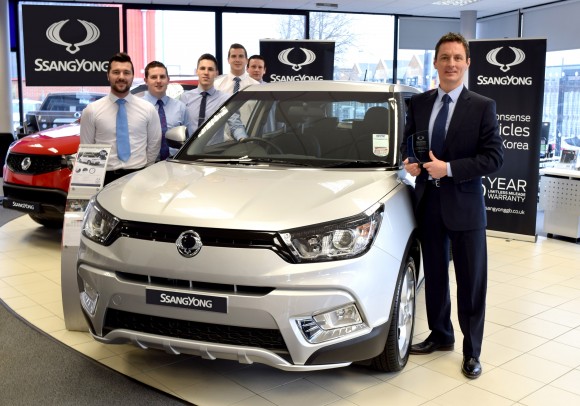 Belfast dealership SERE is the best in the SsangYong network

SERE Ltd of Belfast has been named SsangYong Dealer of the Year.

Presented with their award at a glittering gala dinner held on board the Royal Yacht Britannia in Edinburgh, the dealership was congratulated on selling more cars than any other in the SsangYong UK dealer network.

Their achievement was made all the more significant having only held the franchise since September 2014.

Paul Williams, CEO of SsangYong Motor UK said: ‘Sincere congratulations to everyone at SERE – sales, aftersales and management. This is a great achievement, and a beacon to all our dealers to demonstrate what can be achieved.’

‘We are naturally delighted,’ said Stanley Edgar, managing director of SERE Ltd, which is based in Boucher Road, Belfast. ‘This is a great accolade for the whole team who have worked so hard.

‘Getting a new franchise bedded into a dealership inevitably takes some time and effort.  Everyone has pulled together and the results we have achieved with SsangYong in just over a year are a credit to them all.’

Bernard McCotter, SERE general manager, who accepted the award, added: ‘The SsangYong franchise has done extremely well since we launched just over a year ago.  We are very pleased to have received the Dealer of the Year award and are confident the franchise will continue to go from strength to strength.’

Our picture shows Bernard McCotter, general manager of SERE, with some of his award-winning team

MORE: Final stands at CDX are being snapped up

MORE: Director is recognised as ‘company person of the year’