Home > Big Mike > Big Mike: Since when was a Rover worth more than a Merc? 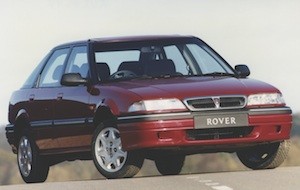 Big Mike: Since when was a Rover worth more than a Merc?

IT’S a tale of two cars this month, and real proof of how the mighty have fallen.

Both of the two cars in question arrived on my lot as part-exes last month and both were a little different from my normal trade-in stock but were nevertheless pretty easy to sell and worth taking on the books, albeit at the cheaper end of the market.

Quite often with older or less desirable cars, a quick ‘trade sale’ ad in the local rag if they look half respectable does the job of getting rid of them. Those that are just too ugly or nasty to contemplate selling go one of three ways: if they’re revolting they get scrapped; if they’re shabby but usable they get driven to the auction as an alternative to a taxi, shoved through the block and I drive home in something else; or if they’re plain comical they usually end up being my daily transport until the tax expires, at which point one of the two aforementioned options comes into play.

With these two, though, none of the above seemed appropriate. We’ll start with car one. The vehicle in question was a 1994 Rover 214 SEI, finished in metallic Nightfire Red.

I remember flogging these when they were nearly new, as they were a perennial favourite of Daily Mail-reading Middle Englanders. The SEi had half leather trim, some stately-looking alloys, metallic paint, power steering, leccy windows and a sunshine roof, which were enough to sway even the most discerning of Hyacinth Buckets into parting with their husband’s hard-earned. That and the incongruous chrome grille that Rover insisted on bolting on to the snout of the later models meant they were an easy sell, not least because these were the days before it became apparent that further down the line most of these engines would eat their own head gasket for lunch.

The one that came in was from a trilby-wearing gent who had decided it was time for something a little smaller – I duly obliged by putting him behind the wheel of a five-year-old Corsa, and he was pleasantly surprised that my part-ex offer was a fairly decent £500.

Now, before you all think I’m off my trolley and call the nearest nurse, allow me to justify that. Not only did I have a pretty decent chunk of margin in the Corsa and the customer was far too much of a gentleman to haggle, but the old Rover was a genuine 35,000-mile-from-new example with all the books. Unscuffed alloys, nearly-new tyres and a receipt for a new, properly-designed head gasket fitted just 12 months earlier made me think I might just make a few quid on the side with this one, so let’s come back to it in a minute.

Car two was another customer wanting to switch into something a little smaller, though this time he was coming from a car that couldn’t really get much bigger. A 2000 X-plated Mercedes-Benz S500L with 150k on the clock and quite a few toys that were never on the ‘standard’ models meant that this car, which came with its original bill of sale, had set its original owner back a cool £76,500. As I waved the new owner off behind the wheel of a tidy, low-mileage Volvo S40, I felt pleased as punch that I’d been able to haggle the Merc off him for just £1,200. A lot of car for the money, you may say.

So what happened next? First up, I had a look on various car sales websites only to realize I’d paid near book for the bloody thing. How on earth could such a beautiful, well- made and superbly-presented motor car be worth so little? I put it in my ad for a rather paltry looking £1,795 and two weeks later waved goodbye to it for £1,550.

Next, the Rover. A quick look at the same websites made it ridiculously hard to value. From what I could see, it was worth somewhere between a bag of peanuts and a bag of sand. So I did the only thing possible and put it up on that well-known colourfully-branded auction website, with a gushingly lyrical description that majored on its history, low mileage and ‘desirable’ colour and spec.

You could have knocked me over with a ten pound note when the auction closed a week later at £1,551.

A bag of peanuts more than my lovely Merc had sold for – to a slightly bolshy local businessman – had found the old dog heading off to a new home with a youthful Austin Rover nutjob from 200 miles away, who paid me instantly by PayPal and collected it within 24 hours, beaming from ear to ear about what he called an ‘incredible find’. It takes all sorts in this game, it really does. And while I much preferred the grand’s worth of profit that I didn’t expect to make on the old 214, I know which of the two cars I’d rather have spent my own money on . . . Funny old world.