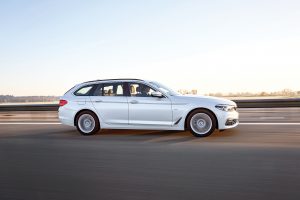 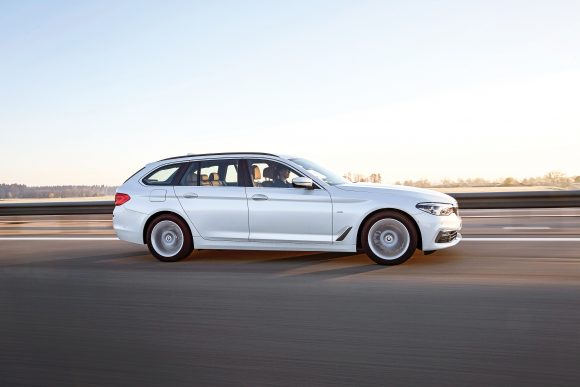 The 5 Series Touring is somewhat of an underground success for BMW. More than a million units have been sold since the car first went into production in 1972, offering buyers high levels of practicality with that all-important badge appeal. The recipe has remained largely unchanged: take all the refinement that you find in the 5 Series saloon, but increase its spaciousness and all-round flexibility. It’s been a package that has sold well throughout Europe, and this latest one is the most technologically advanced yet.

Our test car was a 520d model. Powered by a 2.0-litre turbocharged diesel engine, it’s likely to be the best-selling variant. BMW claims that it’ll return 62.7mpg and emit just 114g/km, making it ideal for private buyers who want a car that is relatively cheap to run, as well as fleet buyers who want a vehicle in a lower business tax bracket. It’s worth pointing out that the base 520d retails for just under £40,000, so doesn’t incur additional premium car vehicle tax charges. In the 520d, power is sent to the rear wheels via an eight-speed automatic gearbox. With 187bhp on tap, it should reach 60mph in 7.5 seconds, and carry on to a top speed of 139mph. Of course, for those who want more punch, there’s a larger 3.0-litre diesel engine, as well as two powerful petrol units.

There’s very little to complain about when it comes to the 5 Series Touring’s driving style. Despite its size – it’s now well over 1,630mm in width and more than 2,975mm in length – it never feels at all unwieldy, and this is down to its well-judged steering which is both precise yet predictable. In truth, it lacks any real feel, but remains accurate. The power delivery in the 520d model is good too, with plenty of poke on tap regardless of revs.

Base-spec SE cars come with a high level of standard equipment. Priced from £38,385, SE-spec cars benefit from 17-inch alloy wheels, LED headlights, air conditioning, as well as front and rear parking sensors. All cars get BMW’s latest iDrive infotainment system, accessed via a 10.25-inch colour touchscreen. Of course, as with any car in the BMW range, there’s a vast options list to choose from. Highlights from this include Driving Assistant Plus, which incorporates adaptive cruise control, lane change assistant and lane keeping assistant, as well as steering and lane control assistant.

BMW plans to sell around 5,000 5 Series Touring models. Considering the way it drives, its high level of build quality and relatively good value for money, we think it could sell an awful lot more.