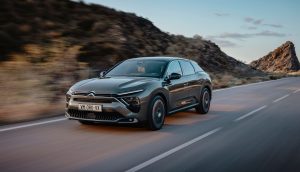 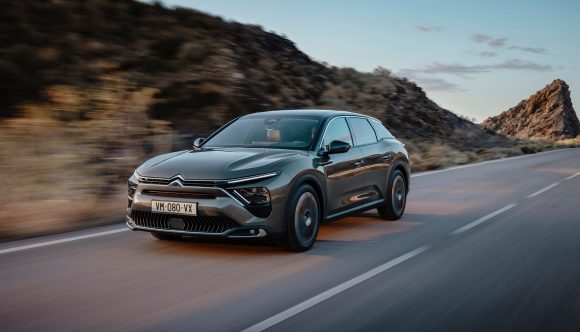 Citroen has revealed a new model to sit at the top of its range – the C5 X.

Combining the themes of saloon, estate and SUV into one package, the new car not only brings back the C5 name to the d-segment, but also takes inspiration from Citroen’s recent CXperience Concept and classic models like the CX.

The C5 X has a bold exterior design with a long bonnet and a fastback, coupe-like roof. There’s a jacked-up ride height which gives it an SUV flavour and 19-inch alloy wheels complete the look.

Inside, the C5 X is fitted with Citroen’s ‘Advanced Comfort’ seats, while a new infotainment system – measuring 12 inches – features a customisable display and natural voice recognition.

The dashboard is trimmed in wood and carries over design themes from the smaller C4, and there’s lots of glass to give an airy feel. 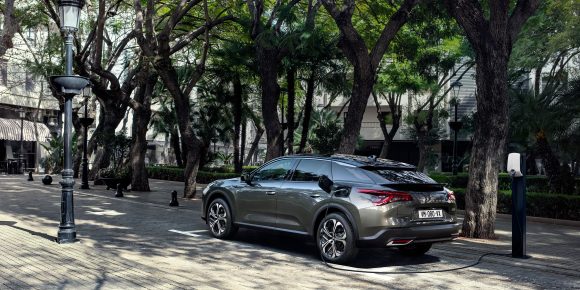 There’s plenty of space inside with good levels of rear legroom and the estate car-like tailgate opens to give 545 litres of boot space, rising to 1,640 litres with the rear seats folded.

Engines will be petrol with a plug-in hybrid option – the latter using a 1.6-litre turbocharged petrol combined with an electric motor for a total output of 222bhp.

Citroen says that the C5 X plug-in hybrid should be able to travel up to 31 miles on electric power alone, too, though further details are due to be announced over the coming weeks.

The C5 X uses Citroen’s hydraulic cushion suspension setup as well, which has been designed to deliver the most comfortable ride possible.

Prices for the C5 X will be announced shortly, though the car is expected to hit the road later in the year.