Dealers are handing over the first 21-reg new cars today, but this year’s March 1 is very different from normal.

With Lockdown 3 restriction still in place, car dealers are having to rely on click-and-collect car sales on the all-important plate-change day of March 1.

In more normal trading times, car dealers would be throwing open their doors to customers desperate to pick up their new car wearing the latest registration.

Car dealers, along with other non-essential retailers, will be open fully again on April 12.

Many dealers, including Vines BMW boss Sean Kelly, have told Car Dealer they feel April will be the new March this year and see the ‘demand pattern delayed’.

However, while March 1 2021 is more muted than before, dealers are taking to social media to drive home some positivity.

John Mcmahon, business manager at Peter Vardy, wrote on LinkedIn ‘Even in the most testing times, we always make an extra special effort for our guests on new plate day’.

The family-run dealer group is handing over gifts along with cars, and its team is ‘buzzing’, despite March 1 2021 being different to normal. 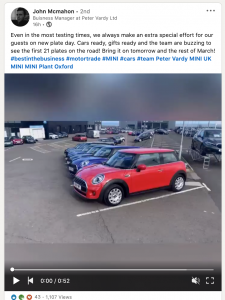 Marshall Honda in Peterborough on Twitter shows off a happy member of staff in a new 21-reg Honda Civic and points customers to the firm’s online services and ‘virtual showroom’.

Day’s Motor Group is busy handing over cars too and is encouraging customers to share pictures of their new 21-reg cars on social media.

If you're collecting yours, don't forget to take a pic and share it with us on social media📷…#Ford #Fiat #Peugeot #newreg #21reg pic.twitter.com/I4dNRNsVsk

The first of many 21-plate Aston Martins waiting to be collected today is a beautifully specified DB11 Volante.#AstonMartin #NewRegDay pic.twitter.com/UM8c17XylY

Manufacturers are getting behind the positive buzz too. Volvo Trucks UK tweeted pictures of a new FH lorry supplied by dealer Volvo Truck and Bus Centre South & East and handed over to DC Morris Transport.

It's #newreg day!!! And great work by the team at Volvo Truck and Bus Centre South & East, supplying this stunning #21reg Volvo FH with I-Save to DC Morris Transport.

It marks their second FH with I-Save to join the fleet, and it's heading up north on its first run this morning. pic.twitter.com/m9fyVRTKbS