Boris Johnson will fly to Brussels in an attempt to reach a breakthrough on a post-Brexit trade deal over dinner with European Commission president Ursula von der Leyen.

The PM and the EU chief will try to salvage negotiations on Wednesday evening after the UK government dropped controversial plans that would have allowed ministers to break international law.

The olive branch came after the two sides reached an agreement on the implementation of the Brexit divorce deal. But Brussels’ chief negotiator Michel Barnier warned EU foreign ministers that he now believes a no-deal departure is more likely than a trade agreement being brokered in time, the PA news agency understands.

Experts said sales of gas boilers should be halted by 2033, new fossil-fuelled car sales – including hybrids – should end in 2032, and people should be encouraged to cut the amount of meat and dairy they eat by a fifth in the next decade.

The Committee on Climate Change says the moves are among those needed to meet its recommended target for the UK to cut emissions by 78 per cent by 2035 on 1990 levels, as part of the sixth ‘carbon budget’ covering climate action in 2033-37.

Vaccine raises hope for end to pandemic, but public warned to stick to rules

Hopes for an end to the coronavirus pandemic have been raised with the rollout of the first vaccine to the most vulnerable, but people are being warned to stick to the rules and ‘not blow it’ in the months ahead.

It is thought hundreds of people were vaccinated at 70 hospital hubs across the UK on Tuesday – dubbed ‘V-Day’ by health secretary Matt Hancock.

Amid the jubilance, Hancock cautioned that the guidance still needs to be followed, as the vaccine is rolled out over the coming months. 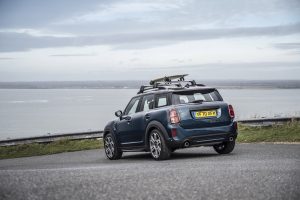 Mini has showcased a new limited-edition version of its Countryman SUV – the Boardwalk Edition.

The new special edition comes in ‘Deep Laguna Blue’ metallic paint, has a black roof and roof rails and plenty of Boardwalk badges, while on the inside there’s a fully digital display cockpit and LED mood lighting.

Priced from £31,600 and limited to just 325 units in the UK, the Boardwalk Edition is available as a 1.5-litre petrol engine-powered Cooper, or a Cooper S with a 2.0-litre turbocharged petrol unit.

More than a quarter of businesses ‘unclear on Brexit readiness’

More than a quarter of UK businesses are not sure they will be ready for Brexit before the end of the year, new data has shown.

The Institute of Directors called on the government to ‘pull out all the stops’ to get a deal before the transition period ends on December 31.

In a survey of nearly 1,000 company directors, 29 per cent said they were unsure whether they would be ready for Brexit before then. Of those who said their business would be affected by Brexit, 57 per cent thought their ability to prepare was somewhat or entirely dependent on the outcome of the negotiations.

The UK’s unusually low sick pay is preventing some workers who need to self-isolate from doing so – and could be contributing to the spread of coronavirus, a new study has claimed.

The Resolution Foundation said that Statutory Sick Pay, which only gives out £96 per week, is the lowest level of government support provided by any advanced economy during the pandemic.

The government should use the Job Retention Scheme, which covers up to 80 per cent of an employee’s salary, to encourage more people to self-isolate when they need to, the foundation said.

Cloud and rain in central and eastern areas will clear during the day, reports BBC Weather, giving sunny breaks, although rain will push into the west later on.

Most areas will be cold and dry tonight, but rain will stay in the west.