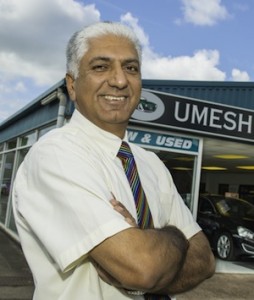 EVANS Halshaw, part of Pendragon, is today revealed as the most influential dealer on the social media website in our exclusive poll, but independent Umesh Samani of Specialist Cars in Stoke is not far behind.

Our research rated dealers on their ‘influence’ using trusted analyst Klout.com and while four big dealers understandably sit at the top of the list, Samani is a shock entrant at number five with a Klout rating of 59.

‘I’m still getting over the shock – I am honoured and humbled to know that I’m one of the top most influential dealers,’ Samani said.

‘Twitter really is a wonderful tool. It’s allowed me to make so many connections not just within the motor industry but all walks of life. Many of the people I’ve met through Twitter are now great friends – the power of Twitter is amazing.’

Topping our Top 100 list was Evans Halshaw with a score of 65, followed by Perrys in second place with 64 and Mercedes Benz Retail in third with 61.

Vicky Finn, group marketing leader for the firm, said: ‘We’re delighted to have been recognised as the most influential car dealer on Twitter. It’s great for the brand, the marketing communications team and our efforts to innovate and be market leaders.

‘We have a clear strategy when using social media platforms. We’ve developed templates and processes focused on customer services and reputation management. But above all we make sure that we’re engaging our community and our business stakeholders by having some fun and talking about motorist interests.’

Second placed Perrys was equally delighted with their runners up spot. Lee Manning, group digital marketing manager said: ‘Just four months ago, we began the implementation of our group-wide social media strategy, so to come second in the Top 100 Most Influential Dealers on Twitter list so soon, is a huge achievement.’

In third place was Mercedes-Benz Retail – the manufacturer-owned dealer group – who said an informal presence on Twitter was key to their success.

‘Twitter is a great way to interact with our customers. By its nature, it’s concise and instant, both of which mean your message has to be sharp and to the point,’ said Mercedes-Benz’s spokesman Angus Fitton.

‘We try to keep our presence informal, interesting and approachable. To be recognised is a real honour and gives us a good basis to aim for an even better result for the next update.’