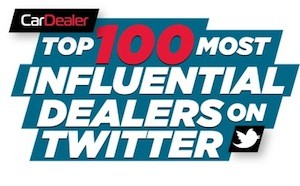 WE’VE spent weeks analysing the motor trade’s Twitter users via Klout – a website which scores social media users on their influence – and today lift the lid on the results.

The list coincides with the launch of Car Dealer Magazine’s brand new forum, which allows the motor trade to comment on the hot topics in the industry. So let us know what you think!

The Top 100 is a list of the most influential car dealers on Twitter, from independent traders to franchised dealer groups, rated by Klout. We researched each company’s influence to reveal the industry’s top tweeters.

How does Klout work?

If you’re not included in the Top 100 list, but think that you should be, tweet @CarDealerMag or leave us a comment in the new Car Dealer Forum and we’ll make sure you’re considered for the next update. Car Dealer will carry out the same process every quarter to find out who’s making their way up the Most Influential ladder.