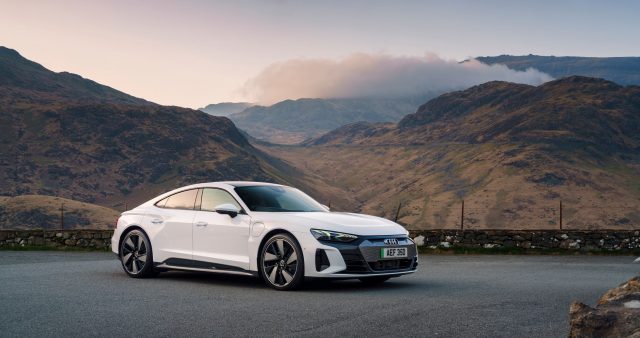 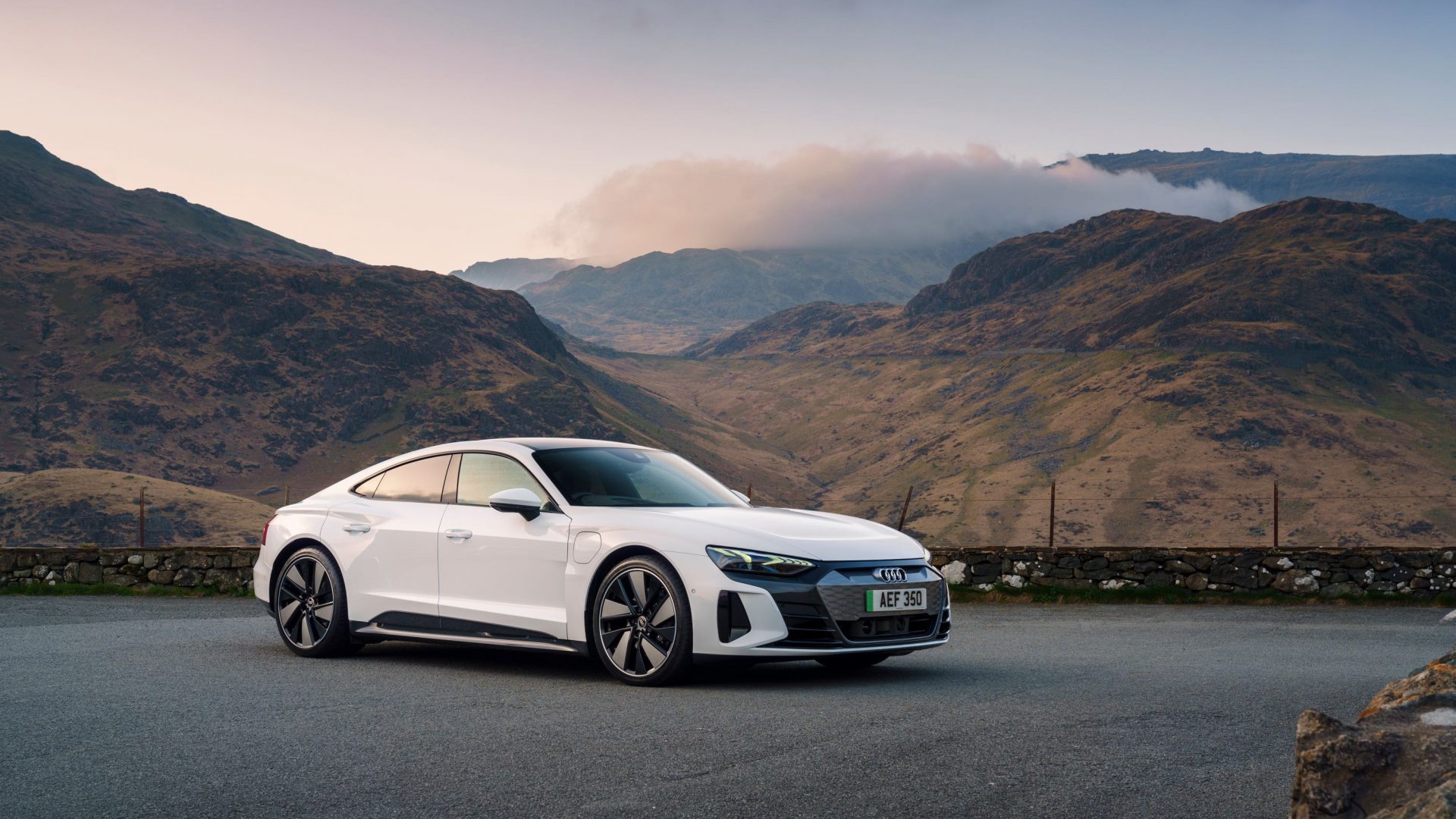 Audi has expanded its electric e-tron range with this classy GT saloon car. Darren Cassey puts it through its paces

Up to now, Audi’s e-tron range has been made up of two SUVs that have shown the German brand can build an electric high-rider with style and desirability. But the range has now been expanded to include a car that’ll be a halo model for Audi’s electric range – the e-tron GT.

As the GT name suggests, it’s a grand tourer with five doors and plenty of cruising ability. It’s not a totally clean sheet of engineering paper though, as the e-tron GT is the sister car to the very excellent Porsche Taycan.

There are two versions of the GT – an ‘entry-level’ quattro model, and an RS that boasts huge horsepower outputs that would leave even the firm’s R8 supercar in the dust. It gets an EV-optimised all-wheel-drive system – though will switch to a front-wheel-drive focus when put in efficiency mode – so making the most of the power is easy.

The batteries are placed low in the car which not only keeps the centre of gravity low, but also helps provide a near-50/50 weight distribution between the front and rear. Those batteries have a 93kWh capacity that provides up to 298 miles of range in the quattro (more on this later) or 283 miles in the RS, while charging capability of 270kW means the GT can go from five to 80 per cent battery capacity in about 23 minutes. 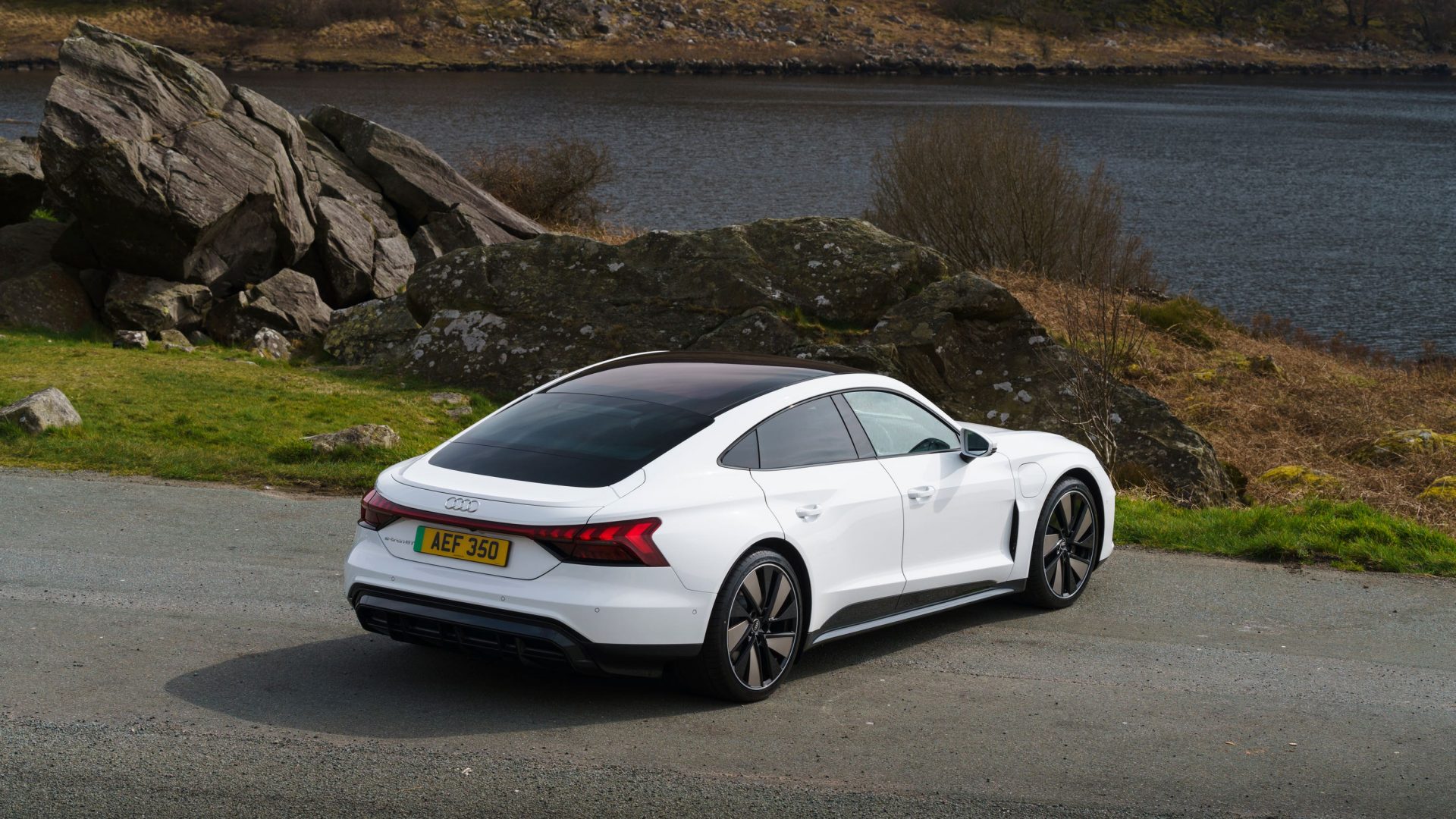 Like the Taycan, the e-tron GT uses a twin-motor set-up, with one on each axle. Engage launch control and you get a special boost mode that increases the power output, from 469bhp to 523bhp in the quattro and 590bhp to 637bhp in the RS.

As we mentioned the range, it’s worth noting that the official figures might be tricky to achieve. Our test route for the media launch in northern Scotland took in beautiful hilly countryside, with the many inclines sapping range – this meant that many of us had to take it easy for most of the circa-170-mile route, yet still only made it back with single-digit percentage battery range…

We got behind the wheel of the quattro, and it’s fair to say GT by name, GT by nature. While the RS model promises gut-punch performance along with its civility, the quattro immediately feels like it’s designed to be driven at a much more leisurely rate.

It’s still incredibly quick and could catch you out if you don’t pay it enough respect, but it feels like there’s a slightly lazier attitude than the Taycan – in a good way. The GT is relaxing to drive from the off, with its beautifully judged suspension soaking up all but the biggest of bumps.

It’s agile, too. This is a heavy car, but with the equal weight distribution and low centre of gravity it doesn’t feel its heft. Sure, it prefers you to be smooth and quick rather than chuck it around, but it’s easy to settle into a fast rhythm when the mood takes you. 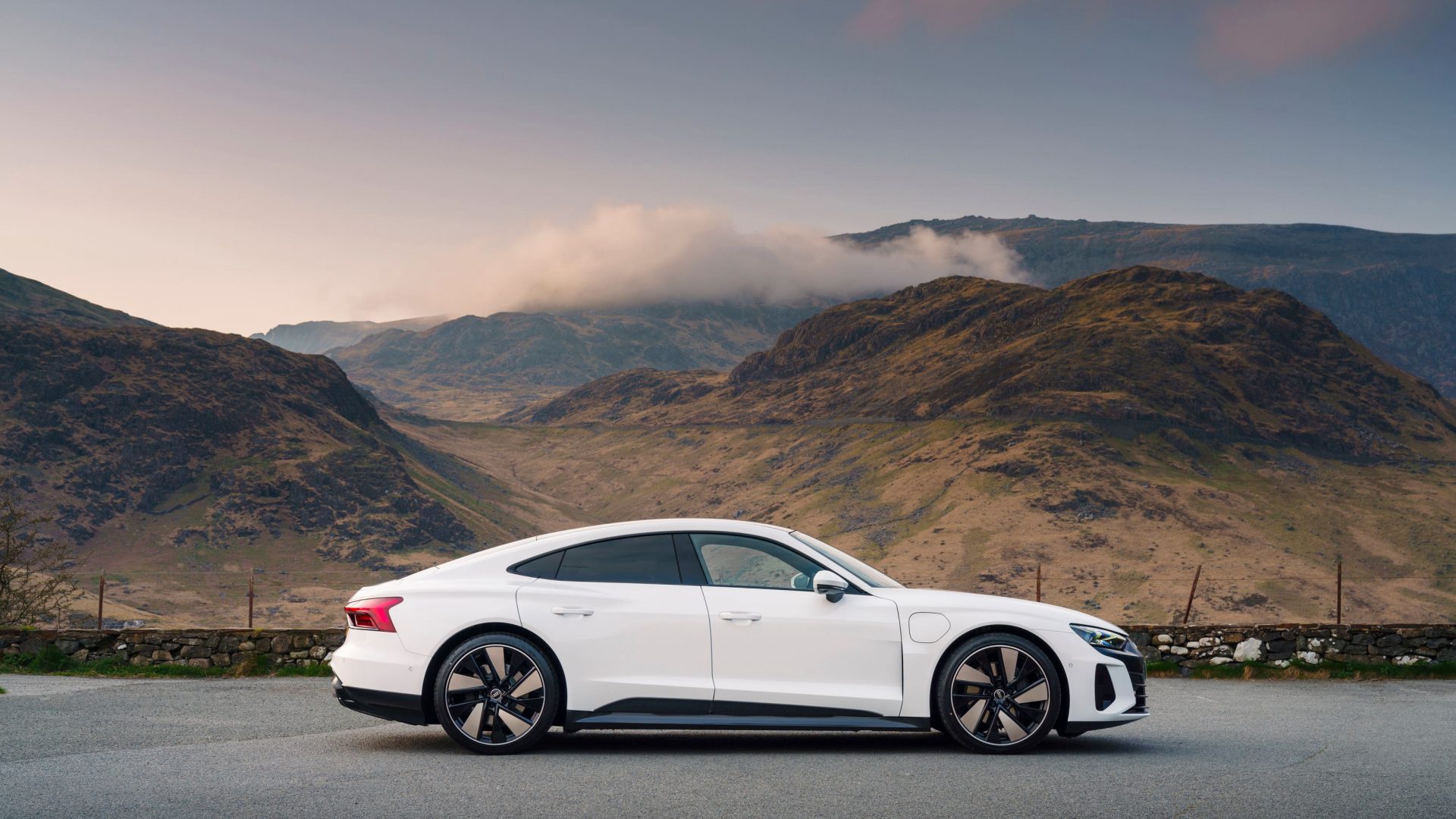 Audi has gone a very different route to Porsche with its sister car. While that car looks brilliant with its quirky face, the e-tron GT is much more subtle and traditional with its looks, yet still has an understated futuristic appearance.

It looks low and wide, helped by the front end that hunkers close to the ground. The bonnet is low, too, and the headlights have a wide but chunky look that help the muscular stance. Audi has done a great job of creating a familiar grille-like face dispute EVs not needing one, incorporating a black section into the bumper with vents and aero devices.

The rear end isn’t quite so sharp – from the front the rear wheel arches really emphasise width and aggression, but from the back the bumper has a softer, more rounded style. There’s no denying it’s a handsome thing, though.

It’s typical Audi class inside, and from the moment you drop into the steering wheel it’s clear no expense has been spared for material qualities. You sit low but with good adjustability, but the most interesting thing is that although the e-tron GT is arguably ‘the future of Audi’, it’s not as screen-laden as other models in the firm’s range, with some welcome physical buttons on the dashboard.

Rear seat space is decent but a little cramped, with taller passengers likely to find the sloping roofline a little claustrophobic. And when you’re driving, the rear window is narrow making visibility out the back poor. 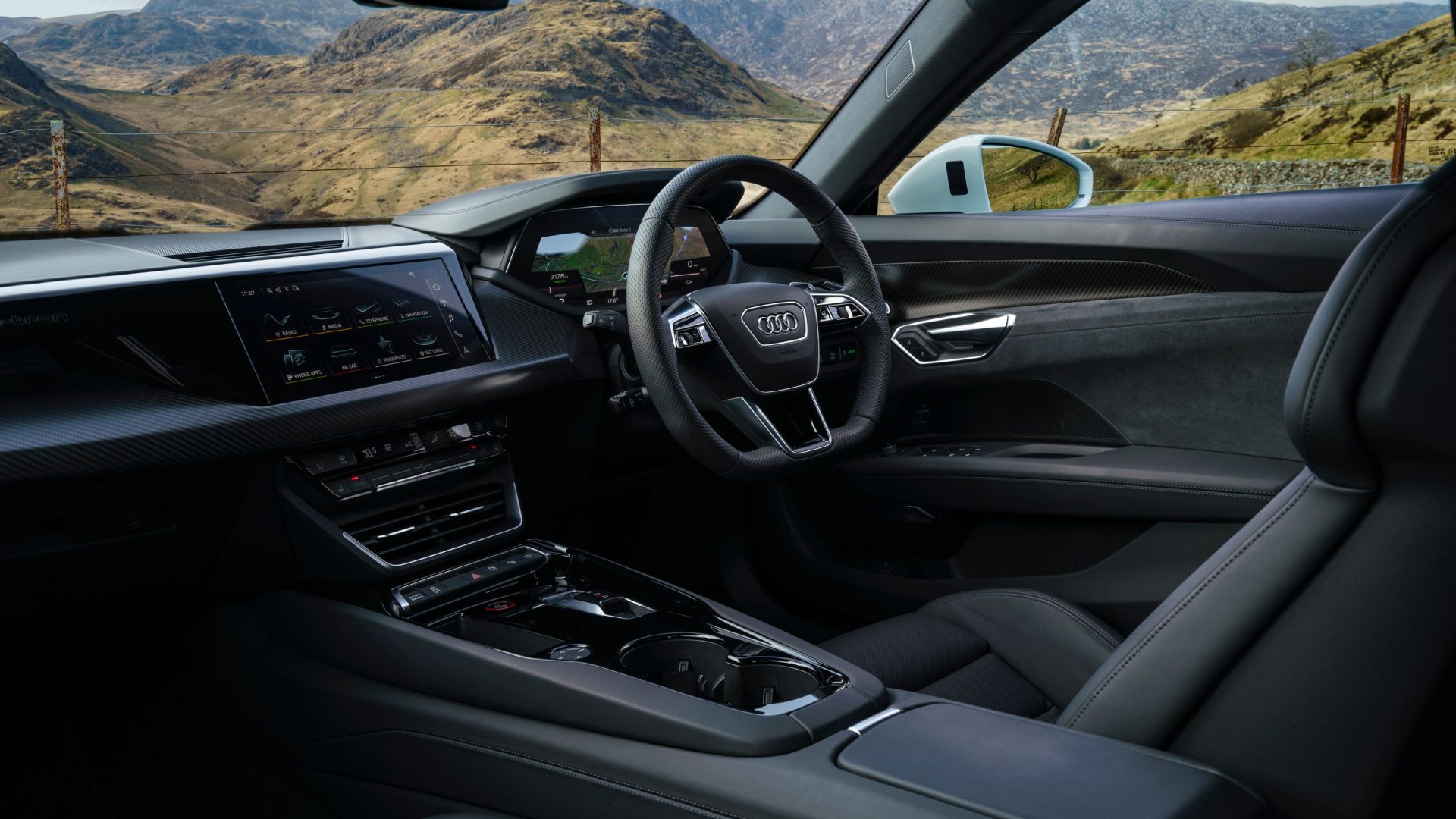 The RS starts at £110,950 and gets 21-inch alloy wheels, adaptive air suspension, Matrix-LED headlights and the Bang & Olufsen sound system. Upgrading to the Carbon Black from £124,540 brings a gloss carbon styling package and carbon extras, a microfibre headlining and a Nappa leather/microfibre upholstery.

Electric drive really feels like the future of the large premium car segment as it suits these cars so well, providing exciting performance along with fantastic refinement.

The fact the Audi e-tron GT doesn’t feel like it’s trying too hard to hit you with futuristic gimmicks only adds to its appeal – it’s simply a brilliant GT that’s handsome and comfortable to drive. If you can resist huge-spec, high-performance models, the sub-£80k quattro model almost feels like a bargain, too.

Range is perhaps the only question mark. Sure, at nearly 300 miles it’s massive, but it’s less than you can get from some of the pricier Teslas and could be a deciding factor when this car is so clearly designed for those travelling longer distances. It’s a minor point, though, because this might just be the class leader in every other department.