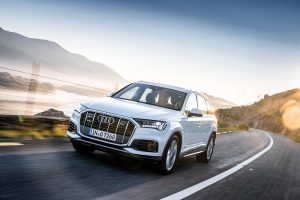 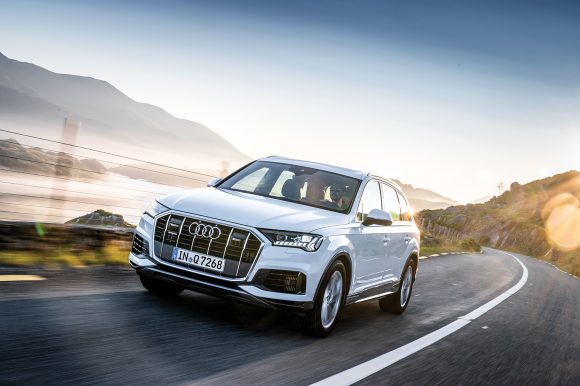 First Drive: Audi Q7 – still one of the best SUVs money can buy?

Look at Audi’s SUV model range today and the choices seem endless. The current line-up includes eight SUVs – and that’s before the rugged Allroad and sportier ‘S’ models are considered.

Cast your eyes back 14 years, and the only ‘Q’ model on sale was the Q7. As more Audi SUVs have filtered into the market, there was always one aspect of continuity – that the Q7 remained the German manufacturer’s flagship SUV.

However, as of last year, that’s no longer the case, as the range-topping gong now goes to the flagship ‘coupe-like’ Q8. Time for a game  of catch-up, then, for the Q7?

If you looked at what was new about the Q8 when it reached showrooms last year, it really is a case of control-C, control-V for the Q7.

The highlight of the update is undoubtedly the cabin, with its prominent, stylish, twin-touchscreen set-up.

Mild-hybrid technology has also been rolled out across the range. By fitting a 48-volt electric motor, small fuel savings are made throughout the line-up. The engine choice itself has been cut back, though, because of strict new WLTP emissions-testing regulations.

As for styling changes, the light facelift brings in a raft of features to help the model fit in with the rest of the ‘Q’ range, which has been overhauled in recent years. This grants it the Q8’s fancy LED lights, a larger octagonal grille and two-tone exterior styling.

At launch, the engine choice is limited to three 3.0-litre V6 units – two diesel and one petrol.

Despite the constant decline in sales of new diesel cars, oil burners remain popular in large SUVs such as this. Hence an astonishing 90 per cent of new Q7s will still be diesel.

It certainly seems the better option, if our 50 TDI test car is anything to go by.

Not bad for a 2.2-tonne SUV. Power is sent to  all four wheels via an eight-speed S tronic automatic gearbox.

This gearbox lets the side down, though. While far from being unresponsive, it’s noticeably hesitant under hard acceleration.
That said, this refined, smooth and torquey engine is a delight.

The only petrol option currently is a 335bhp, 3.0-litre unit that’s incredibly smooth and holds the performance edge over the diesel. A cheaper 241bhp 3.0-litre diesel is also available.

What initially strikes you about the Q7 is how it feels relatively small to drive even though it dwarfs other large SUVs. Despite that, it’s easy to manoeuvre – more so for cars fitted with the all-wheel steering. Minimal input is needed around town, which also aids the Q7’s usability factor – important given how many cars such as this reside in cities.

However, what is most impressive about the Q7 is its refinement. Hushed engines help initially, but with sound-proofing to rival the best luxury saloons, very little road noise makes its way into the cabin. Also, once a pricey option, adaptive air suspension is now fitted as standard. This is a superb feature.

There’s a surprising lack of roll in the corners for such a hefty SUV, although a BMW X5 will prove more involving behind the wheel.

Taking on Audi’s latest ‘family face’, the updated Q7 gains all the styling cues found in the latest raft of Q models. Most notable is the new octagonal single-frame grille, which brings new chrome vertical slats to give the model more presence on the road.

Matrix LED headlights are also included as standard and come with a lighting signature mirroring that of its Q8 sibling. They’re a bit over-complicated, though – one simple LED bar gives a far more effective look in our opinion.

The lower areas of the car now come in a two-tone painted finish, which Audi says is to draw attention to the ground clearance.

The fit and finish throughout are superb – you don’t even get a sniff of cheap plastic. It feels every bit as premium as a £60,000 SUV should.

But it’s the new twin touchscreen system that feels like the biggest step forward.

Replacing one 8.3-inch system is a 10.1-inch screen looking after the sat nav and phone pairing etc, and a lower 8.6-inch screen taking care of the climate control.

It’s the same layout seen in the Q8 and looks and feels far more modern than before. Unlike other markets, UK Q7s come with seven seats as standard, although you can choose to have it as a five-seater.

Space in the second row is plentiful, with acres of headroom and legroom. The third row is best reserved for children though, as there isn’t that much room back there.

You could write short stories with the list of standard equipment the Q7 comes with – highlights include 19-inch alloy wheels, adaptive air suspension and electrically operated and heated leather seats.

Next up is the best-selling S line, which will start from £61,500. This adds the desirable sports styling, 20-inch alloy wheels, Valcona leather upholstery and sports seats. The stealthy Black Edition (from £66,000) brings a full gloss black styling kit, along with a sportier adaptive air suspension set-up and 21-inch Audi Sport wheels.

Sitting at the top of the Q7 range is Vorsprung, which comes with more kit than most will ever need. It adds clever all-wheel steering to reduce the turning circle, laser LED headlights to double the standard headlights’ vision, ventilated seats, a Bose sound system and a vast number of  safety features. Just a few highlights here  include turn assist, adaptive cruise control and  a 360-degree camera that can detect an accident all around the vehicle.

But there’s a big catch – the price. Vorsprung will set a buyer back £82,500 as a minimum. At that price, the Q7 looks remarkably expensive.

Top Gear said: ‘As far as being a nicely appointed seven-seat SUV with real practical appeal if you regularly haul multiples, the Q7 meets the brief.’ Auto Express said: ‘Audi has focused its attention on aesthetics, technology and mild-hybrid efficiency to bring its largest SUV up to date.’

Even before this facelift, the Q7 was one of the best luxury SUVs on sale today. It’s pretty hard to take a backwards step from that, so unsurprisingly this facelift has only improved on a winning formula.