First Drive: Audi’s e-tron GT is the flagship of the firm’s EVs

by Jack Evans
in Car News
0

This is the German manufacturer’s most powerful electric vehicle, but what else does it have to offer?

The electric revolution is well and truly upon us. Manufacturers across the board are making the leap to battery power, producing cars that aim to bring clean, efficient motoring without the er, motor.

But up until now, they’ve majored on the side of practicality and ease of use.

However, Audi has introduced this – the new e-tron GT – as a flagship for its range of EVs and a way of showing what electric power can really do. 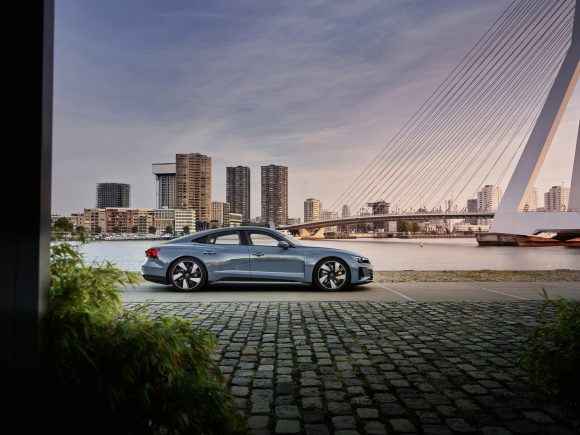 The e-tron GT sits on the same platform as the Porsche Taycan and, as a result, follows a similar set-up to the car from Stuttgart.

We’ve got a heady combination of batteries and motors that endow the GT with a huge amount of performance, while super-rapid charging means 62 miles of range could be added in as little as five minutes.

The GT also benefits from Audi’s quattro all-wheel-drive system, while four doors and two boots mean it’s certainly a car that could be used every day.

The e-tron GT quattro uses a dual-motor set-up, with one on the front axle and another at the rear.

Together you get 470bhp, although this can be increased to 523bhp for 2.5 seconds in boost mode when launch control is engaged.

In terms of range, Audi claims the e-tron GT will manage up to 295 miles from a single charge.

Although we’ve already mentioned rapid charging, a full charge via a regular home wallbox can be completed overnight. The wealth of power that the e-tron GT gives you access to is nothing short of astounding.

This isn’t even the most powerful version – you can look to the RS-badged variant for that title – yet the way it shoots away from the standard start is breathtaking.

It’s backed up by brakes that stop well and steering which, although light, gives a good amount of accuracy to the vehicle as a whole.

But it’s the damping that shines through here.

Our car rode on optional air suspension – the e-tron GT comes on steel springs as standard – and it endowed the car with such exceptional ride quality that only the very largest of potholes were translated as bumps through to the cabin.

It also gives you the ability to firm the ride up, should you want a little extra body roll support in the corners.

The e-tron GT’s look is clever and well resolved.

It’s recognisable as an Audi thanks to its wide front end and uber-large badge, but it moves the game forward in terms of design thanks to clever cuts and lines, as well as the eye-catching full-width light bar at the rear.

It’s a long car, mind you, measuring 4.99 metres. For context, that’s slightly longer than a Range Rover Sport, which means you get an awful lot of footprint to look at when it’s parked up.

It does, of course, also mean that you have to take extra care when positioning the car at low speeds so that you don’t inadvertently catch one of its elegant extremities on a kerb.

The interior of the e-tron GT will be immediately familiar to anyone who has sat in a recent model.

You’ve got screens aplenty – although the GT does away with Audi’s twin-screen set-up from its Q7 and A6 models in favour of a single display – while there are plenty of physical buttons for a variety of the controls.

It’s a breath of fresh air in a time where many carmakers are switching dials and switches for touchscreen displays.

There’s a decent amount of space in the back, too, although the sloping roofline does impede headroom somewhat.

You’ve also got a boot in the conventional place, but the GT’s charging cables do take up quite a lot of the space here. An additional front storage area provides extra space, but you’ll only be able to fit a few smaller bags here. 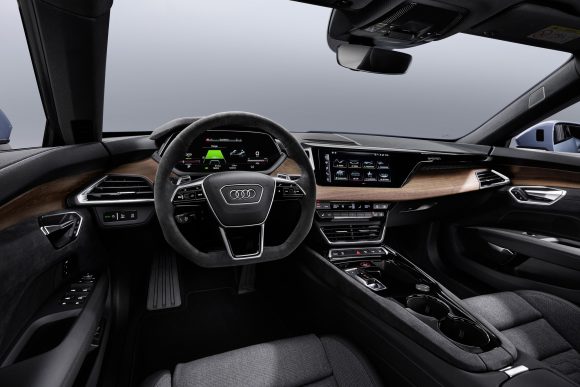 There’s plenty of equipment on board the e-tron GT, as you’d expect from a car costing just shy of £80,000 at base.

There’s Audi’s Virtual Cockpit set-up, which comprises a 12.3-inch screen ahead of the driver and can be configured to show a variety of information including range, battery status and speed.

Then there’s the single 10.1-inch infotainment system in the middle of the car, which is where you’ll access features such as media and satellite navigation.

It’s just the same as we’ve seen in most recent Audi models, which means it’s simple and easy to navigate.

The e-tron GT is a great example of the direction Audi is heading when it comes to electrification. It’s good-looking and immensely useable while being properly exciting and good to drive.

It’s a shining example of how electric cars needn’t be sterile. This is a car that you want to own and would be happy to spend hours behind the wheel of. Think EVs don’t have a heart? The e-tron GT proves otherwise.