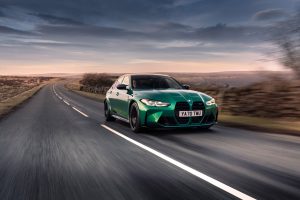 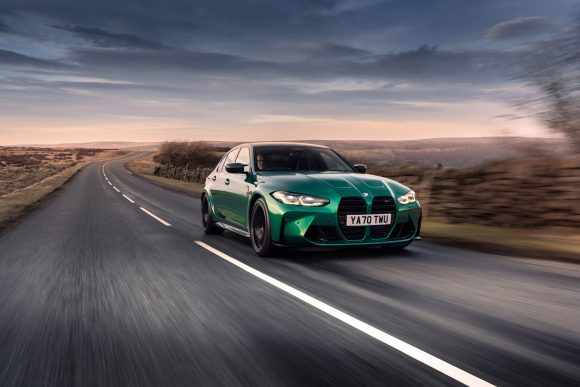 First Drive: BMW’s M3 has its eyes set firmly on the future

The BMW M3 is well known around the world – but with such a weight on its shoulders, can this new performance model succeed? 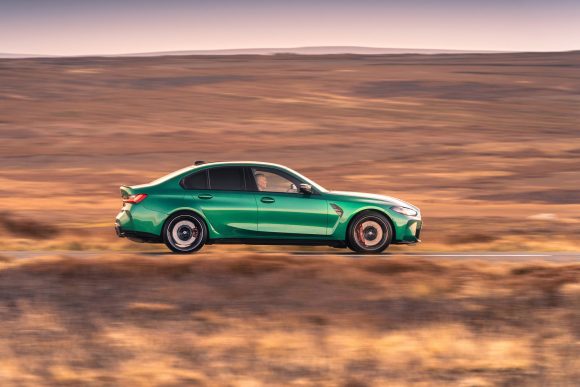 There are few names quite as evocative in the motoring world as M3.

It’s represented usable, practical performance for decades, which is why the arrival of a new model is usually accompanied by a significant amount of fanfare, and it’s no different for this latest G80 generation.

With a striking new look, an even punchier engine and all manner of cutting-edge driver aids, this M3 looks set to live up to expectations.

There’s a lot to talk about here. The new M3 is wider and longer than before, while its engine is even more powerful than the one it replaces.

It’s also going to be available with all-wheel drive for the first time – although initial cars to the UK like ‘ours’ can only be specified in rear-wheel drive – while a practical Touring version is in the pipeline, too.

In terms of layout, this latest M3 follows a formula that’s been used throughout the years by BMW: a big engine up front, a driver in the middle and power to the rear wheels.

But far from being rooted in the past, this is a car with both eyes focused on the future. 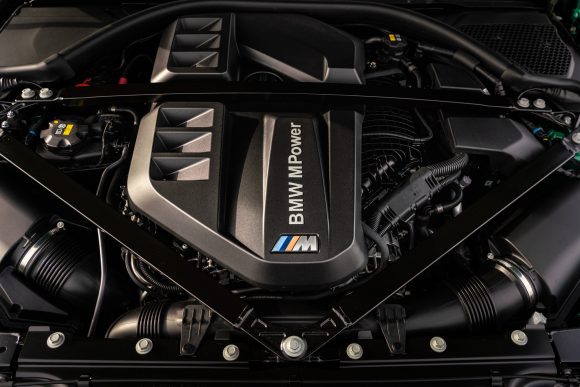 The M3 has a 3.0-litre six-cylinder engine

The new M3’s powertrain might appear familiar on paper. Like the F80 before it, the G80 uses a 3.0-litre twin-turbocharged six-cylinder engine with power sent to the wheels through an automatic gearbox.

However, it’s a distinctly changed unit and shares more with the engines fitted in cars such as the M340i and M440i than did its predecessor.

Buyers in the UK are only able to buy Competition-spec cars, which means they get the full-fat 503bhp and 650Nm of torque – significant increases on the older M3 CS’s 460bhp and 600Nm.

The M3 arrives as a far more approachable car to drive than before.

Time spent behind the wheel of the older car was often a fraught affair, with traction being a distant memory when driving in the wet or colder temperatures.

This M3 manages to be a far easier car to pilot than before and not to the detriment of outright enjoyment.

That engine is brawny and responsive and, in truth, provides more performance than you could ever possibly use from a road car.

Second gear is practically unusable fully open in the UK, lest you want to incur the wrath of the local constabulary.

However, the level of grip on offer means you can carry speed through the bends and enjoy the car’s balance, while the steering is by far the most improved aspect of the whole affair – communicative and responsive without being overly weighty or numb. 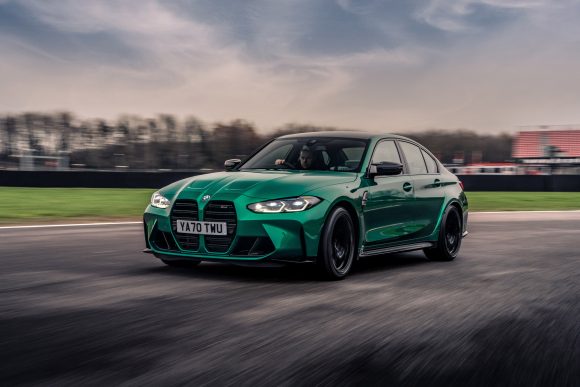 Is it best that we call the looks of the new M3 divisive?

Certainly, when this latest car was revealed to the public it caused quite a stir, with the vast majority of the comments centred around those kidney grilles.

We’d argue that in the metal the impact they have is lessened as a result of the number plate being fitted ahead of them, but they’re still hard to miss.

Elsewhere, the M3 is less revolutionary. It’s a great-looking car from three-quarters, while the quad exhaust pipes and large rear diffuser give plenty of aspects to look at. 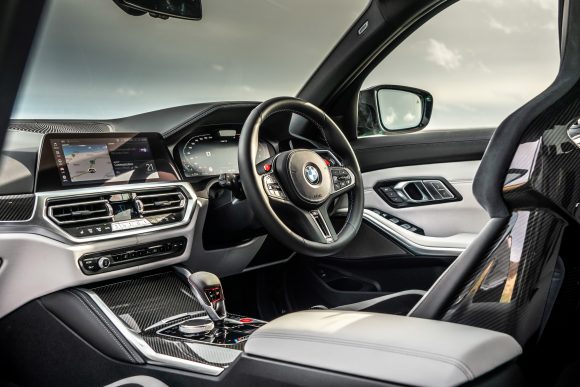 Things are quite restrained inside the M3

It’s actually inside the M3 where things calm down.

Although the front end of the car is revolutionary, to say the least, in the cabin it’s a far more restrained affair.

The seating position is excellent, with good levels of adjustability available from both wheel and seat.

Speaking of the seats, the carbon-backed bucket seats fitted as an optional extra to our car were wonderfully supportive and were both heated and electrically operated.

They might be a steep box to tick as part of the £6,750 ‘Carbon Pack’, but if you’re looking for the most comfortable option available then we’d highly recommend them.

There’s a decent amount of space for those sitting in the back, too, while the boot’s 480 litres of space is more than usable in size. 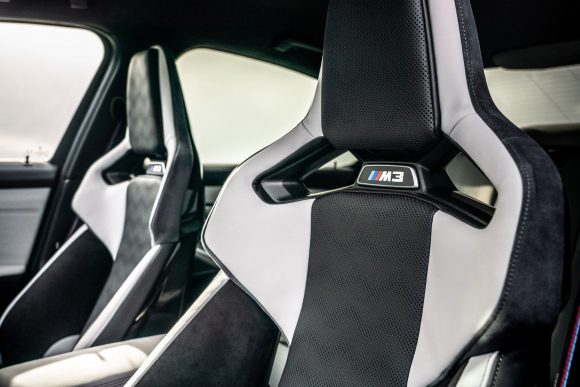 The carbon-backed seats are extremely comfy

Although the M3 costs more than £70,000 without options, BMW has fitted a generous amount of kit to it as standard.

Most notable are the M Adaptive Suspension and M Sport differential, which both contribute to making the car as dynamically spot on as it is.

Elsewhere, you’ve got features such as wireless phone charging included off the bat, alongside a premium Harmon/Kardon stereo and on-board wifi hotspot.

Our car also came with some choice upgrades that pushed the price north of £80,000.

They consisted of the aforementioned seats, a comfort pack comprising a heated steering wheel and electric boot lid (£990) plus high-performance Laserlights which, though steep at £1,500, are well worth adding for cutting through the murky weather the UK so frequently suffers from

The BMW M3 brings something new to the table by appealing to a wider market of drivers.

Even novices behind the wheel of a performance car will be able to get the best from this M3 thanks to its approachable handling.

Yet those with more wheel time under their belts will be able to tailor the car’s multitude of settings to offer them more of a challenge.

This is a car that ticks all of the boxes. It’s spacious, practical and will be easy to live with on a daily basis.

However, it also brings enough pace to outgun its rivals and has the chassis balance and composure to match. If we were the M3’s competition, we’d be very worried indeed.