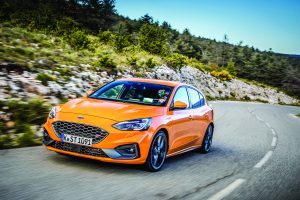 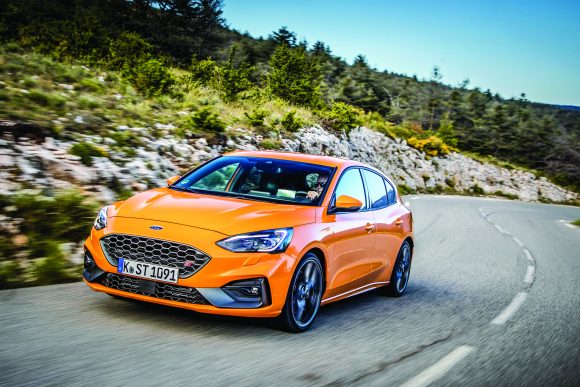 Whenever there’s a new Fast Ford, it’s a pretty big deal. Particularly in the UK, hot versions of the Blue Oval’s regular models have captured the imaginations of car enthusiasts for generations.

Although most will hark back to bewinged Cosworths tearing up rally stages, these days there are also more sensible, usable performance Fords.

These models tend to wear the ST badge, signifying a go-faster car that’s not quite as wild as those that wear the RS moniker.

The Fiesta ST has long been the hot supermini standard-bearer, but while the Focus ST has earned a cult following, it tends to struggle to beat the best in the hot hatch segment.

Can this new model finally take the fight to the big boys? At circa £30,000, it really has to.

It seems that Ford is fed up with being the alternative option – as in the ‘yeah it’s flawed but it’s less expensive than the best hot hatches’ choice – because this new Focus ST has been sent to battle with some big guns in its arsenal.

The engine is a detuned version of that found in the previous-generation RS and current Mustang, it finally gets an electronically controlled limited-slip differential (eLSD) to control power through the front wheels, and there’s rev matching on downshifts, new drive modes plus ST-specific suspension and steering. On paper, then, it’s a serious bit of kit.

The ST gets its own version of the now-familiar 2.3-litre EcoBoost four-cylinder engine that has served Ford Performance so well. With 276bhp, it’s the most powerful Focus ST ever and is about 30bhp up on the old one.

What’s perhaps even more impressive is 420Nm of torque – that LSD had better work, then. That figure is available in the middle of the rev range, while peak power is higher at 5,500rpm. The result is that putting your foot down even at lower revs gives a punchy response, but if you’re not in the mood for full banshee mode you can short shift and still feel a kick.

There’s also a diesel for those who are less fussed by hard-charging performance and want lower running costs. The 2.0-litre unit makes 187bhp and promises about 59mpg, although we haven’t tested it here.

So it’s looking good on paper, but what about Tarmac? Well, here’s the good news for your customers who are Fast Ford fans: it’s brilliant. Not perfect, but in a whole new league compared with the old one.

Even in the tightest of corners, the eLSD manages power output to smoothly but rapidly shunt you out of corners, with the front wheels occasionally skipping across the rough Tarmac to let you know you’re on the limit before you step over it. Lift off and you’re brought right back in line.

The engine is boosty and the exhaust note sounds great, the steering is super-direct, the brakes are superb, and the body stays in control even when you’re pulling off a chain of high-speed switchbacks. This is more RS than ST.

One thing to note, though, is that in Sport mode, the occasional bumpy section of road could unsettle the car. The exhilarating and picturesque Route Napoleon in the south of France, where the launch took place, isn’t the smoothest Tarmac, but there are signs the suspension could struggle more on Britain’s broken roads. That said, in Normal the ride is impressively comfortable and could be any more mundane Focus. (Which is intended as a compliment.)

There tend to be two ends to the hot hatch spectrum. You can either go subtle and subdued like the Volkswagen Golf GTI, or more Fast and Furious wannabe like the Honda Civic Type R. The Ford definitely leans towards the Golf’s ethos, looking more like a sporty family car.

That said, the standard car is already quite handsome, and with more angular bumpers, twin exhaust exhausts and bigger alloy wheels, the ST turns the temperature up just enough to match
its performance.

Again, subtlety is the order of the day. Aside from a few ST badges and some fake carbon-fibre trim, you really could be in any other Focus. Are you starting to notice a trend here? This will appeal to some, who want their hot hatch to blend into everyday life seamlessly. However, wanting something more special from your £30k Focus is also a justified viewpoint.

The stand-out feature of the interior, though, is the Recaro bucket seats. They’re brilliantly judged, offering enough side bolstering to keep you in place in corners without getting in the way when you’re changing gear. As always with Ford, the driving position is spot-on, too.

As you might expect from a £30,000 Focus, the ST is well equipped. On the outside, you get all the sporty bodywork you’d expect from a hot hatch, while inside, those bucket seats are a welcome addition. On-board equipment includes selectable drive modes, adaptive cruise control, a B&O sound system, wireless charging and an eight-inch touchscreen infotainment system.

Keen drivers should also tick the performance pack option, which adds a Track driving mode, rev matching on downshifts, launch control and a shift indicator light. Having tested this option extensively, we would say it really enhances the experience.

Car Throttle said: ‘The good stuff outweighs the bad by a big margin.’ Pistonheads said: ‘There are clearly some very good bits about this ST.’

If you tried the old model and were somewhat underwhelmed, have a go in this one – you’ll be pleasantly surprised. If you owned and loved the old one, this new one will blow your mind.

Ford has pulled off a big win here at a time when the hot hatch market has never been better, but the established benchmark models have been around a while.

The new Ford Focus ST has a price to rival some of the best in class, and fortunately, with the help of some impressive technological upgrades, it’s able to call itself a genuine
on-road rival.